by Bible Study
143views
Who, or what, is the Antichrist? Evil alliance, or sinister individual? Some say his appearance is still in the future. Others say he appeared long ago in the days of ancient Rome. But the Bible indicates that he is alive today! The Bible prophecies teach this antichrist power will play a crucial role in the final events of earth’s history. Do you know who he is? Are you sure? You need to be, for you can’t understand last-day events until you understand this evil power. Be prepared for one of the most intriguing Study Guides yet! This Study Guide, based on Daniel chapter 7, clearly and unmistakably identifies the Antichrist. But it is only an introduction. Future lessons will reveal details of some of his activities that will have worldwide impact. What you discover today may displease or sadden you, but please remember that the prophecy of Daniel chapter 7 comes from Jesus, who loves you. Pray for God’s guidance as you delve into this urgent subject. Be sure to read Daniel 7 before studying this guide. 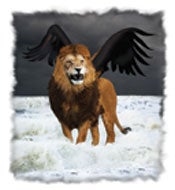 1. As the chapter begins, Daniel sees four beasts coming up out of the sea. In prophecy, what does a beast represent? What does the sea represent?

“The fourth beast shall be the fourth kingdom upon the earth.” Daniel 7:23. “The waters … are peoples, and multitudes, and nations, and tongues.” Revelation 17:15. 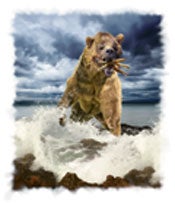 “The Lord shall bring a nation against thee … as swift as the eagle flieth.” Deuteronomy 28:49. 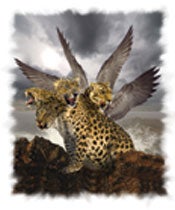 3. What kingdom does the bear represent (Daniel 7:5)? What do the three ribs in its mouth symbolize?

Answer:   Read Daniel 8. Notice that the beasts in chapter 8 parallel those in chapter 7. Daniel 8:20 specifically names Medo-Persia as the kingdom that precedes the rough goat, or Greece, of verse 21. It is the second world kingdom, the same power as the bear of Daniel 7. The empire was made up of two groups of people.
The Medes came up first (represented in Daniel 7:5 by the bear coming up on one side), but the Persians eventually became stronger (represented in Daniel 8:3by the ram’s second horn which grew “higher,” or taller). The three ribs represent the three principal powers conquered by Medo-Persia:

Answer:   The four heads represent the four kingdoms into which the empire of Alexander the Great was divided when he died. The four generals who headed these areas were: Cassander, Lysimachus, Ptolemy, and Seleucus. The four wings (instead of two like the lion) represent super-speed, which was true of Alexander’s conquests (Jeremiah 4:11-13).

5. The Roman empire, the fourth world kingdom, is represented by a horrible monster with iron teeth and 10 horns (Daniel 7:7). What do the horns represent?

Answer:   The 10 horns represent the 10 kings or kingdoms into which pagan Rome was eventually split (Daniel 7:24). (These 10 kingdoms are the same as the 10 toes of the image described inDaniel 2:41-44.) Roving barbarian tribes swept in upon the Roman empire and carved out land niches for their people.

Seven of those 10 tribes developed into the countries of modern Western Europe, while three were uprooted and destroyed. The next section will discuss those kingdoms that were rooted up. 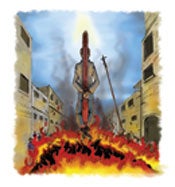 6. In the Daniel 7 prophecy, what happens next?

“I considered the horns, and, behold, there came up among them another little horn, before whom there were three of the first horns plucked up by the roots: and, behold, in this horn were eyes like the eyes of man, and a mouth speaking great things.” Daniel 7:8.

Answer:   The “little horn” power appears next. We must identify it carefully because God takes more space describing it than the other four kingdoms combined. Why? Because the biblical characteristics identify it as the Antichrist of prophecy and history. There must be no mistake in making this identification.

7. Are there clear points of identification?

Answer:   Yes, God gives us nine characteristics of Antichrist in Daniel 7 so we can be certain of his identity. And even though some may find these truths from God’s Word painful, we must be honest enough to accept them as His revealed will. Now let’s discover what Jesus’ nine points are:

A. The “little horn” or kingdom “came up among them”the 10 horns which were the kingdoms of Western Europe (Daniel 7:8). So it would be a little kingdom somewhere in Western Europe.

C. It would pluck up or uproot three kingdoms (Daniel 7:8).

F. It would emerge from the pagan Roman empire, the fourth world kingdom (Daniel 7:7, 8).

H. It would “speak great words against” or blaspheme God (Daniel 7:25). In Revelation 13:5, the Bible says the same power speaks “great things and blasphemies.”

Don’t forget all these identification points come directly from the Bible. They are not some human opinion or speculation. Historians could tell you quickly what power is being described. These points can fit only one power, the papacy. But in order to be certain, let us carefully examine all nine points, one by one. There must be no room left for doubt.

8. Does the papacy fit these points?

Answer:   Yes, it fits every point perfectly. See items A through H below.
A. It “came up among” the 10 kingdoms of Western Europe.
The geographical location of the papal power was in Rome, Italy the very heart of the territory of Western Europe.

C. It would pluck up or uproot three kingdoms.
The emperors of Western Europe were largely Catholic and supported the papacy in its growth and authority. Three Arian kingdoms, however, did not support the papacy, the Vandals, Heruli, and Ostrogoths. So the Catholic emperors decided they must be subdued or destroyed. Here is how Dr. Mervyn Maxwell, a theologian and historian, described the results in volume 1, page 129, of his book God Cares:

“The Catholic emperor Zeno (474-491) arranged a treaty with the Ostrogoths in 487 which resulted in the eradication of the kingdom of the Arian Heruls in 493. And the Catholic emperor Justinian (527-565) exterminated the Arian Vandals in 534 and significantly broke the power of the Arian Ostrogoths in 538. Thus were Daniel’s three horns the Heruls, the Vandals, and the Ostrogoths’plucked up by the roots.’ ” It is not difficult to recognize that the papacy fits this point.

E. It would make war with and persecute the saints.
That the church did persecute is a well-known fact. The papacy clearly admits doing so. Much supportive evidence exists. Even conservative historians claim the church probably destroyed at least 50 million people over matters of religious conviction. We will quote here from two sources:

1. “That the Church of Rome has shed more innocent blood than any other institution that has ever existed among mankind, will be questioned by no Protestant who has a competent knowledge of history. 1

2. In The History of the Inquisition of Spain, D. Ivan Antonio Llorente provides these figures from the Spanish Inquisition alone:

F. It would emerge from the fourth kingdom of iron – the pagan Roman Empire.
We are quoting two authorities on this point:

2. “Whatever Roman elements the barbarians and Arians left … [came] under the protection of the Bishop of Rome, who was the chief person there after the emperor’s disappearance. The Roman Church in this way privily pushed itself into the place of the Roman World-Empire, of which it is the actual continuation.” 3

So, once again, the point fits the papacy.

G. God’s people (the saints) would “be given into his hand” for “a time and times and the dividing of time.” Daniel 7:25.

Several things need clarification in connection with this point:

1. A time is a year, times is two years, and the dividing of time is a half-year. The Amplified Bibletranslates it: “Three and one-half years.” 4

4. Thus, the little horn (Antichrist) was to have power over the saints for 1,260 prophetic days or 1,260 literal years.

5. The rule of the papacy began in A.D. 538, when the last of the three opposing Arian kingdoms was uprooted. Its rule continued until 1798 when Napoleon’s general, Berthier, took the pope captive with hopes of destroying both Pope Pius VI and the political, secular power of the papacy. This period of time is an exact fulfillment of the 1,260-year prophecy. The blow was a deadly wound for the papacy, but that wound began to heal and continues healing today.

6. This same period of persecution is mentioned in Matthew 24:21 as the worst period of persecution God’s people will ever experience. Verse 22 tells us it was so devastating that not one soul would have survived if God had not shortened it. But God did shorten it. The persecution ended long before the pope was taken captive in 1798. It is plain to see that this point, likewise, fits the papacy.

H. It would speak “great words” of blasphemy “against the most High [God].”
Blasphemy has two definitions in Scripture:

Does this point fit the papacy? Yes!

5 The papacy further undermines Jesus by setting up a system of confession to an earthly priest, thus bypassing Jesus, our High Priest (Hebrews 3:1 8:1, 2) and only Mediator (1 Timothy 2:5).

Next consider the evidence for it claiming to be God: “We [the popes] hold upon this earth the place of God Almighty.”

6 Here is another: “The pope is not only the representative of Jesus Christ, but he is Jesus Christ, Himself, hidden under the veil of flesh.”

7 Its obvious this point, likewise, fits the papacy.

I. It would “think to change times and laws.”
In a future Study Guide we will deal with the “times” of this point. It is a major topic and needs separate consideration. But what about changing the “laws”? The Amplified Bible translates “laws” as “the law.” The reference is to changing God’s law. Of course, no one can really change it, but has the papacy attempted to do so? The answer is “yes.”

There is no doubt that the little horn power of Daniel chapter 7 (the Antichrist) is the papacy. No other organization could possibly fit these nine points. And incidentally, this is no new teaching. Every Reformer, without exception, spoke of the papacy as Antichrist. 8

Words of Care and Concern
Lest some should think that we are attacking fellow Christians by identifying this little-horn power, please keep in mind that the prophecy is aimed at a system and not individuals. There are sincere, devout Christians in all churches, including the Catholic faith. Daniel chapter 7 is simply a message of judgment and correction upon a large religious institution which compromised with paganism, like so many other churches that arose after her.

Prophecy Reveals Faults of All Faiths
Other prophecies point out the faults of Protestant and Jewish faiths. God has true people in all religions. His true people (no matter what their faith) will always humbly accept the correction of the Lord and will not shut their ears and hearts against Him by self-defensiveness. We should be very thankful that God’s Word speaks with impartial honesty on every subject.