Bible Truth About The Great Tribulation

One of the problems with the rapture theory, is that those who hold on to this false teaching, believe that they will be ‘raptured’ away before the great tribulation. They believe that God does not want them to go through the tribulation, so they are waiting for God to take them away before it starts. Are they holding on to a false hope? I believe they are and they are in danger of not being prepared for what is to come. We have seen on the rapture page, that this doctrine is false and not Biblical, and I believe that the Bible is very clear on the issue of the great tribulation too, in that we WILL go through it. And on this page you will find out the Bible truth about the tribulation.

Deuteronomy 4:29-31 …’But if from thence thou shalt seek the LORD thy God, thou shalt find him, if thou seek him with all thy heart and with all thy soul. When thou art in tribulation, and all these things are come upon thee, EVEN IN THE LATTER DAYS, if thou turn to the LORD thy God, and shalt be obedient unto his voice; (For the LORD thy God is a merciful God;) he will not forsake thee, neither destroy thee, nor forget the covenant of thy fathers which he sware unto them.’

Notice that the above Bible verse says WHEN we are in tribulation, which confirms it WILL happen for God’s people, EVEN IN THE LATTER DAYS.

Let’s take a quick walk through history. What did God do with Israel when the plagues Now think about this. What about the disciples in the New Testament. They went through great tribulation for Jesus and most of them were killed for their faith. And what about all those Christians who were tortured and killed at the hands of the Roman Church during the dark ages. Why would God let all previous Christians go through great tribulation and be killed, and yet take the end time Christians away from it? It makes no sense. Tribulation has a purpose. It comes to our lives as a refining fire to test and refine our faith and weed out the chaff.

Matthew 13:20-21 …’But he that received the seed into stony places, the same is he that heareth the word, and anon with joy receiveth it; Yet hath he not root in himself, but dureth for a while: for WHEN tribulation or persecution ariseth because of the word, by and by he is offended.’

Again the word WHEN is used in conjunction with tribulation. And Jesus confirms that we need to have a strong deep rooted faith in order to get through any trials, otherwise we will just fall away. Which is why knowing the truth of this teaching is vital.

Matthew 24:21-22 …’For then shall be great tribulation, such as was not since the beginning of the world to this time, no, nor ever shall be. And except those days should be shortened, there should no flesh be saved: but for the elect’s sake those days shall be shortened.’

The above verse from Matthew 24 also applies to the period during the reign of the Roman Catholic Church between 538AD – 1798, known as the “dark ages”. During that time millions and millions of Christians were slaughtered by the Roman Church. Now, did God take them away from this great tribulation? No, He was with them THROUGH it. Most of them were murdered by the Roman Church because of their true faith in Jesus. So what makes you think that God is going to take you away from the last tribulation? You and I may need to be killed for our faith, but God will be right there with us, helping us through it, just like He was with those who gave their lives for Jesus during the dark ages. He isn’t going to take us away from it, as this false rapture theory teaches.

Are you willing to go through tribulation for your Saviour? Jesus Christ went through great tribulation for us, and died for us. Why should we not go through tribulation for Him? The great tribulation is coming for all TRUE Christians and you need to be ready for it, otherwise you may get sifted out like those that fell on stony places as above in Matthew 13. The problem today is that there are too many preachers out there preaching smooth doctrines and nice easy sounding things. They want you to believe that God only wants to give you prosperity and not tribulation. These are but lies from satan to make you unprepared for the trying time ahead.

1 Peter 4:12 …’Beloved, think it not strange concerning the fiery trial WHICH IS to try you, as though some strange thing happened unto you.’

IN THIS WORLD WE WILL HAVE TRIBULATION 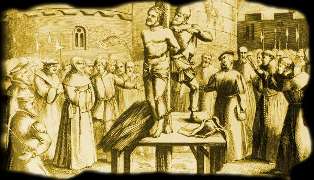 John 16:33 …’These things I have spoken unto you, that in me ye might have peace. In the world ye SHALL have tribulation: but be of good cheer; I have overcome the world.’

Acts 14:22 …’Confirming the souls of the disciples, and exhorting them to continue in the faith, and that we must THROUGH much tribulation enter into the kingdom of God.’

Romans 5:2-3 …’By whom also we have access by faith into this grace wherein we stand, and rejoice in hope of the glory of God. And not only so, but we glory in tribulations also: knowing that tribulation worketh patience.’

Romans 8:35-39 …’Who shall separate us from the love of Christ? shall tribulation, or distress, or persecution, or famine, or nakedness, or peril, or sword? As it is written, for thy sake we are killed all the day long; we are accounted as sheep for the slaughter. Nay, in all these things we are more than conquerors through him that loved us. For I am persuaded, that neither death, nor life, nor angels, nor principalities, nor powers, nor things present, nor things to come, Nor height, nor depth, nor any other creature, shall be able to separate us from the love of God, which is in Christ Jesus our Lord.’

1 Thessalonians 3:4 …’For verily, when we were with you, we told you before that we should suffer tribulation; even as it came to pass, and ye know.’

BUT WHAT ABOUT REVELATION 3:10?

Revelation 3:10 …’Because thou hast kept the word of my patience, I will also keep thee from the hour of temptation, which shall come upon all the world, to try them that dwell upon the earth.’

This verse alone is used by those supporting the rapture teaching to say that the church will be taken away before the tribulation starts. Well, let me first say that this is ONE verse. And yet we have listed numerous verses above to show that we will go through tribulation. So what should a logical thinking person do? He should re-study that ONE verse in light of all the other evidence which goes against the one verse to find out the truth.

Secondly, this verse in Revelation 3:10 is actually referencing a different church age. This is the Philadelphia church age which points to God’s people during the 1800’s. And because this particular group of Christians were a faithful group who had no rebukes against them, and who were small in number. God gave them this promise that they would not see the final tribulation when the mark of the beast was to be enforced (Revelation 13). It does not apply to the church in the last days.

Revelation 7:14 …’And I said unto him, Sir, thou knowest. And he said to me, These are they which came out of great tribulation, and have washed their robes, and made them white in the blood of the Lamb.’

SATAN IS MAKING WAR WITH THE SAINTS

Revelation 12:17 …’And the dragon was wroth with the woman, and went to make war with 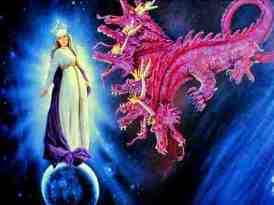 the remnant of her seed, which keep the commandments of God, and have the testimony of Jesus Christ.’

How is it that Satan can make war with the saints of God in the last days if they are going to be “raptured” away? And how is it that the beast can seek to kill the saints who don’t take the mark of the beast if they have been taken to heaven beforehand? These verses only make sense if the rapture teaching is false and the church is on earth to go through the tribulation during the enforcement of the mark of the beast.

The signs reveal we are living in the end time, and a time is coming when the true saints of God will face severe persecution from the beasts of Revelation 13 (which are the Roman Catholic Church and America). Please do not put your trust in this rapture theory, and hope to be taken away before the great tribulation, because if you do, then most likely you will not be prepared for what is coming upon this world soon.

Share
Facebook
Twitter
Pinterest
WhatsApp
Previous articleThe Truth about the Rapture
Next articleUS military action against N. Korea is ‘option on table’ – Secretary of State Tillerson
Bible Study
Join us on Facebook or Follow us on Twitter by clicking on the icons to get more updates. Have a question? Join our Forums and lets discuss. Consider sharing this article. It's that simple to spread the gospel. God bless you.