The revised logo will include minor changes, giving it a bolder appearance, and will give special attention to the accents and nuances found in western and eastern languages alike.

Church leaders voted during the 2016 Annual Council to approve minor changes to the 20-year-old logo of Seventh-day Adventist Church that would align the flame with the Bible, representing an alignment of the Holy Spirit and the Bible, and would also center the cross with the flame and the Bible. Leaders also voted for slight edits that would give the logo a bolder appearance, creating a sharp presence on various platforms.

The proposal was delivered on Sunday, October 9, by Williams Costa Jr., director of communication for the Seventh-day Adventist world church, who explained that the changes are needed to meet the need for new usage demand guidelines, to offer international localization and the inclusion of eastern languages and to meet the best practice approach of updating an organization’s logo and guidelines every 15 to 20 years.

“There’s not a drastic change,” says Ella Simmons, general vice president of the Seventh-day Adventist world church, “But it is important that we refine that which is symbolic of our identity, our definition, our brand.”

After hearing the presentation, members of the Church’s Executive Committee, the second highest governing body of the Seventh-day Adventist Church, voted to develop comprehensive guidelines, including colors and usage, over the period of several months. During this period, leaders will be allowed to make suggestions, which will be brought back before delegates of the world church to be accepted in 2017. Once completed, the new logo and guidelines will be made available to designers around the world.

A lot of arguments had however been made that the current logo was the work of the Illuminati infiltrating the Adventist church. Many argued that the cross was concealed but yet closer look showed it to be the same inverted cross used by Satan worshipers.

The cross of course represents Christ and his crucifixion. In satanism this is turned upsidedown in order to mock and dishonour Christ and his death. It is an act of disrespect and disdain for Christ, and an honouring of the opposing force to Christ, which is in rebellion to God, rather than submission and obedience. The central teaching in satanism is to do your own will (“do what thou wilt shall be the whole of the law”), rather than God’s, so this symbols represents a rejection of God’s will and Christ. 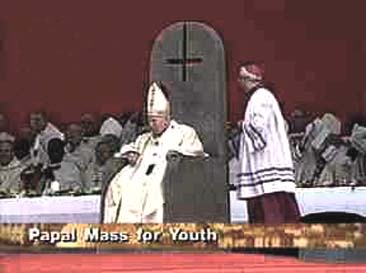 In summation; The upside down cross represents a rejection and mockery of Christ and adherence to the opposite force.

Check out this post on Occult Symbol in Church.

Share
Facebook
Twitter
Pinterest
WhatsApp
Previous articleHillary Clinton Publicly Supports gay marriage but privately hates homosexuals
Next articleOccult Symbology in the Adventist Church Logo
Bible Study
Join us on Facebook or Follow us on Twitter by clicking on the icons to get more updates. Have a question? Join our Forums and lets discuss. Consider sharing this article. It's that simple to spread the gospel. God bless you.