Revelation 18:4 …..’And I heard another voice from heaven saying, come out of her My people, that ye be not partakers of her sins and that ye receive not of her plagues.’

See WHO IS BABYLON THE GREAT to find out who Babylon is.

At a time when the people and leaders of the world are looking for unity between church denominations and religions through this ecumenical / interfaith movement, God is calling His people OUT.

To seek unity between the different churches and faiths of the world is a direct rejection of God’s call to come out. This message is of great importance and I hope you will prayerfully study it. Now from the link above, “WHO IS BABYLON THE GREAT” you will see that Babylon is none other than the Roman Catholic Church. She is the ‘Mother’ of harlots, and her ‘harlot’ daughters are the so called ‘Protestant’ churches who have not only held on to some of Rome’s false teachings, but are now joining back with their ‘Mother’ in this ecumenical movement.

So this message – “come out of her My people”, is to the people who are members of the Roman Catholic Church and members of the fallen protestant churches. God has one true church, not a number of different churches, but one …. Revelation 14:12 ….’Here is the patience of the saints, here are they (GOD’S TRUE CHURCH) that keep the commandments of God and the faith of Jesus.’ …. But notice that God is saying“Come out MY PEOPLE”. This means that God has people within Babylon who are living up to the light they have received. They are living a true faith according to what they know. And once they see the truth of God’s Word, which the priests and leaders of these fallen churches have been hiding from them, then they will come out and join with God’s true remnant people who “keep the commandments of God AND the faith of Jesus.”

If you read Revelation 18:4, you will see that Babylon is guilty of many sins and will receive the final wrath of God before Jesus Christ returns which are the 7 last plagues. And anyone who stays in Babylon (the Roman Catholic Church) or the fallen Protestant churches will also be guilty of her sins and will also receive of the plagues and be forever lost. So this is a VITAL message to those in Babylon.

So what ‘sins’ are Babylon guilty of?

Revelation 18:2-3 …’And he cried mightily with a strong voice, saying, Babylon the great is fallen, is fallen, and is become the habitation of devils, and the hold of every foul spirit, and a cage of every unclean and hateful bird. For all nations have drunk of the wine of the wrath of her fornication, and the kings of the earth have committed fornication with her, and the merchants of the earth are waxed rich through the abundance of her delicacies.’ 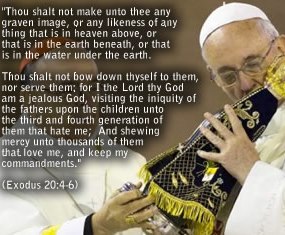 The Roman Catholic Church is a blending of Paganism with Christianity. Throughout history there had been Pagan ‘gods’ that presided over every aspect of man’s life. And when the Roman Catholic Church began to rise to power, she gathered all these Pagan ‘gods’ and ‘baptized’ them as ‘Christian’. So we have a church that is full of idols and relics that the people venerate (worship) and so called dead ‘saints’ (Pagan gods) that they pray to. And the Pagan ‘queen of heaven’ became Mary who is now worshiped by Catholics. Not only that, the Roman Catholic Church is guilty of murdering MILLIONS of people and abusing COUNTLESS little children and women! Please see the following links for well researched work.

See THIS SHOCKING LIST of Vatican crimes against children!

“According to the 1996 survey of nuns in the United States (which was intentionally never published by the Church but was leaked by some Vatican insider), it is reported that a minimum of 34,000 Catholic nuns (about 40 percent of all American nuns) claim to have been sexually abused.” (Lucifer’s Lodge, William H. Kennedy, p.179)

“In the ninth century, many monasteries were the haunts of homosexuals; many convents were brothels in which babies were killed and buried … Promiscuity was rife in monasteries and convents.” (Vicars of Christ; 1988; Pages 404 and 408)

“Pope John Paul II presided over the second ‘pornography of the Papacy’. He presided over the greatest, most widespread, immoral scandal of sexual perversion in church history.” (The Death of the Pope of Rome; 2005; Page 14)

“The policy of silence and cover-up promoted by the Vatican is mind-boggling. The vast amount of data which the Vatican collected concerning the sexual activity of clergy makes it clear that the Pope and Curia were well aware of how wide-spread and common the sexual abuse problem was in the Church. It did nothing to redress the situation but continued with a policy of cover-up and silence.” (Lucifer’s Lodge: Satanic Ritual Abuse in the Catholic Church; 2009; Page 178)

The greatest deception and sin in Babylon was prophesied in Daniel 7, where it says a ‘little horn’ power would rise from the Roman Empire and ‘think to change times and law’. The little horn is Papal Rome and the times and laws that the Papacy ‘thought to change’ was the very law of our Creator and Heavenly Father, found in the ten commandments. The Roman Catholic Church claimed to have the authority to change the commandments of God, which is what they did. They removed the 2nd commandment to do with worshiping idols and they changed the 4th commandment which states we are to keep the 7th day as the sabbath, to the 1st day. And this was done so that the Pagans could join with the Catholic Church but continue to worship their sun-god.

See the truth about the sabbath day HERE

Take a look at many statements made by the Catholic Church throughout her history which are an abomination to God.

The Daughters of Babylon

Revelation 17 reveals that Babylon has ‘daughters’ who will also share in her many sins and plagues. But who are the daughters of Babylon? These are the fallen Protestant churches. How are they ‘fallen’? They are fallen for the following reasons:

They have held on to the false ‘sabbath’ of Papal Rome (Sunday).

They have embraced spiritualism through the false teaching of the ‘immortal soul’.

They proclaim the devilish teaching that the lost will burn for all eternity!

They proclaim the damnable teaching that we cannot keep God’s commandments.

Their churches have become entertainment centres, rather than holy places of worship.

They are now uniting with Babylon the Mother in this ecumenical movement!

These churches are fallen along with Babylon and anyone who remains in these fallen churches will also be guilty of her sins, will receive of her plagues and be forever lost. Please heed the warning and seek the truth of God’s Word. For the truth on some of the above false teachings, see the following pages:

Please prayerfully study the above truths and heed God’s call to come out of Babylon and her daughters.

What Church is Giving This Message?

The angel in Revelation 18 that gives this call to come out of her My people is not a literal angel. Nor is it the literal voice of God booming down to the earth. No, this angel is a MESSENGER and in Bible prophecy this represents God’s true church (messengers) on earth. It is God’s remnant church who give these warnings to the world, not literal angels. God speaks to the world through His people on earth. So what church is giving this message? Well, we just need to find the church that is giving this warning to the world to “come out of the Roman Catholic Church and the fallen protestant churches”, and the other warnings of Revelation, like the three angels messages of Revelation 14, and the truth about the mark of the beast in Revelation 13.

There is only one church that is proclaiming these warnings to the world, and that is the faithful few within the Seventh-day Adventist Church. I say ‘few within’ because there are many within God’s end time church who are lukewarm in their faith, doing nothing for the Lord. And Satan is even using some people in the church to do away with Adventist truth. But there are a faithful few within the Adventist church who are sounding the warning and proclaiming the everlasting truth to the world.

The faithful servants of God within the Seventh-day Adventist Church are faithfully standing apart from the world and are proclaiming these endtime warnings to the world, and they are the one people “keeping the commandments of God and the faith of Jesus”. It is amazing to think that the name Protestant was introduced because the reformers who formed the Protestant churches were “PROTESTING” against the Roman Catholic Church and revealing the Papal Church as Antichrist. And yet now, the majority of Protestant churches reject what the reformers did and are starting to join back with her. But true Seventh-day Adventists still boldly proclaims the truth about the Papal Church of Rome being Antichrist.

Will You Come Out of Her?

Are you a member of Babylon, the mother of harlots, or a member of one of her daughters? God is calling you out today! Don’t settle for half truths from your pastor, study God’s Word for yourself and let Christ Jesus light up your life with the whole truth. God is waiting to save you!

2 Corinthians 6:14,15,17 …’Be ye not unequally yoked together with unbelievers: for what fellowship hath righteousness with unrighteousness? and what communion hath light with darkness? And what concord hath Christ with Belial? or what part hath he that believeth with an infidel? Wherefore come out from among them, and be ye separate, saith the Lord, and touch not the unclean thing; and I will receive you.’

The churches of the world are saying “LET’S JOIN TOGETHER FOR A COMMON CAUSE”, but we say “COME OUT FROM AMONG THEM AND BE YE SEPARATE”. Please heed the warning.

Revelation 18:4 …..’And I heard another voice from heaven saying, come out of her My people, that ye be not partakers of her sins and that ye receive not of her plagues.’