In Daniel’s dream, he sees the four winds of heaven churning up the great sea. Scripture tells us that winds symbolize war (Isaiah 21:1-2; Jeremiah 25:32 and 49:36-37). The sea represents the people, or a populated region (Revelation 17:15). By applying the Biblical definitions of these symbols, we can see that war and strife will be raging among the nations.

And four great beasts came up from the sea, each different from the other (Daniel 7:3 NKJV)

The first was like a lion, and had eagle’s wings. I watched till its wings were plucked off; and it was lifted up from the earth and made to stand on two feet like a man, and a man’s heart was given to it (Daniel 7:4 NKJV).

The lion is used in the Bible as a symbol of authority and power. The symbol is applied to Christ as the Lion of Judah, but it is also the symbol for Babylon, the destroyer of nations and the seat of the apostate religion, which would seek to entice God’s people into idolatry. The prophet Jeremiah prophesied about Babylon’s destruction of Jerusalem, using the symbol of a lion for this mighty power: 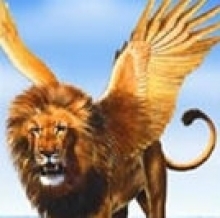 I will bring disaster from the north,
And great destruction.
The lion has come up from his thicket,
And the destroyer of nations is on his way.
He has gone forth from his place
To make your land desolate.
Your cities will be laid waste,
Without inhabitant (Jeremiah 4:6-7 NKJV). 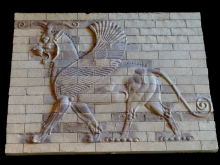 The lion of Daniel 7 has eagle’s wings, a further reference to Babylon. Archaeology has revealed that a lion with eagle’s wings was a common symbol in Babylonian designs and sculptures. Moreover, the eagle often symbolizes the sun god. This means that the sun god powers the lion. This union of the human element with the sun god is in defiance of the true God.

The religion of Babylon forms the basis of all pagan religions, making Babylon a fitting symbol for the end- time confederacy of religious powers aligned against God and His people. This confederacy will control events at the end of time and is portrayed in Daniel 2 as the feet of iron and clay. In the closing stages of Earth’s history, a power resembling Babylon will once again control the planet’s events.

And behold another beast, a second, like to a bear, and it raised up itself on one side, and it had three ribs in the mouth of it between the teeth of it: and they said thus unto it, Arise, devour much flesh (Daniel 7:5). 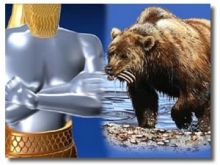 We know from the statue prophecy of Daniel 2 and from history that the Medo-Persian Empire would rise after Babylon. This power is portrayed in Daniel 7 as a bear. The bear was raised up on one of its sides, referring to the initial inequality of the two powers of the Medo-Persian alliance that was to overthrow the Babylonian Empire.

Cyrus serves as a type of Christ. He ended Babylon’s rule and set the captives free. The decree issued by Cyrus was that the Israelites were to be freed, that they could return to their homeland without cost. In the same way, Christ will overthrow spiritual Babylon at the end of time. He will set the captives free and take them to their heavenly home. Their redemption will be without cost. (Isaiah 45:1, Isaiah 61:1).

After that, I looked, and there before me was another beast, one that looked like a leopard. And on its back it had four wings like those of a bird. This beast had four heads, and it was given authority to rule (Daniel 7:6 NIV).

After the Medes and the Persians, a third power would arise to take control.Daniel 2 and history both tell us that the Greek Empire came after the Medo-Persian Empire. In Daniel 8, we read in a further prophecy that “Grecia” would subdue the Medo-Persian Empire, and that it also would be divided into four subkingdoms before succumbing to the Roman Empire. The leopard beast in Daniel 7 has fourheads and four wings that symbolize the four subkingdoms.

The symbol of the leopard is a fitting symbol for the kingdom of Grecia in view of the swiftness of its conquest. The “Grecia” referred to in Daniel 8 should not be confused with the Greece of the classical period that preceded the fall of Persia. That Greece does not match the timeline of Daniel 2. This Greece must be a power that overcomes the Medo-Persians and establishes itself as a world dominating power coming from the Grecian culture.

This is the semi-Greek Macedonian Empire of Alexander the Great, who subdued revolts in the states of Greece and Thrace. Alexander then declared himself successor to the Pharaohs, and his troops worshiped him as if he were a god.

One of Alexander’s aims was to spread Greek culture and philosophy throughout his realm. Greece added many refinements, rites, and ceremonies to the earthly systems of worship. The Bacchus cult, the mythologies of the battles of the gods, and the worship of female deities became entrenched in the very fiber of society.

After that, in my vision at night I looked, and there before me was a fourth beast—terrifying and frightening and very powerful. It had large iron teeth; it crushed and devoured its victims and trampled underfoot whatever was left. It was different from all the former beasts, and it had ten horns (Daniel 7:7 NIV). 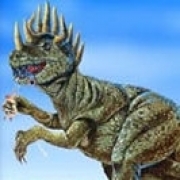 The fourth beast defies description. It is terrifying, frightening, and very powerful. It would be the kingdom that would fill up the cup of God’s wrath. Although Rome would become divided, the iron would remain even to the time of the destruction by the stone.

Following the sequence of Daniel 2, the terrible beast of Daniel 7 represents Rome. Although divided into ten through the ten horns, it is still Rome that rules until the end of time. The iron does not change; it is just separated by clay.

This article is adapted from Truth Matters by Professor Walter J. Veith

Share
Facebook
Twitter
Pinterest
WhatsApp
Previous articleWhat Was The Beast’s First Wound?
Next article2 Ukrainian Pastors Baptize 610 in Madagascar
Bible Study
Join us on Facebook or Follow us on Twitter by clicking on the icons to get more updates. Have a question? Join our Forums and lets discuss. Consider sharing this article. It's that simple to spread the gospel. God bless you.