Did you know the Trinity teaching is an ANTICHRIST teaching according to the Bible?

According to the Trinity teaching, Jesus Christ is not the literal Son of God. 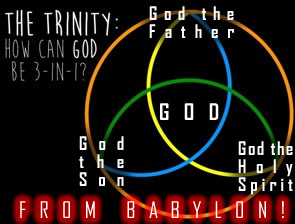 Instead, the Trinity teaching says Jesus is part of this ‘3 in 1 god’, being co-equal, co-eternal and co-existent alongside the Father, with the Holy Spirit being a separate divine being in this strange ‘three gods in one god’ teaching. But what does the Bible say about Jesus Christ being the literal Son of God?

John 16:27-28 …’For the Father himself loveth you, because you have loved me, and have believed that I came out from God. I came forth from the Father, AND am come into the world: again, I leave the world, and go to the Father.’

John 17:7-8 …’Now they have known that all things whatsoever you have given me are of you. For I have given unto them the words which you gavest me; and they have received them, and have known surely that I came out from you, and they have believed that you did send me.’

Romans 8:3 …’God sending his own Son in the likeness of sinful flesh, and for sin, condemned sin in the flesh.’

Friends, the false Trinity teaching, which comes from Babylon, is an antichrist teaching. Please don’t let the church leaders deceive you any more. This is more important than many people realize. Please prayerfully study this for yourself and let the truth set you free. Source End Times News

Share
Facebook
Twitter
Pinterest
WhatsApp
Previous articleArchaeologists find the gate to Goliath’s hometown
Next articleCatholics, Protestants and Muslims join in New Mexico to support Pope’s encyclical
Bible Study
Join us on Facebook or Follow us on Twitter by clicking on the icons to get more updates. Have a question? Join our Forums and lets discuss. Consider sharing this article. It's that simple to spread the gospel. God bless you.