God’s Law: The One, the Two, the Ten and the Many

Law isn’t very popular in our society – especially moral law. Doing your “own thing” is promoted in popular media and commercials. Postmodern culture is allergic to absolutes, and laws are absolutes.

Law even seems to have a bad reputation in Christian circles. After all, Paul said that the Law is no longer needed after a person comes to Christ, right? (See Gal. 3:24) We are now free in Christ – free from law!

And that has some Adventists defending the Law of God with vigor – sometimes to the extent of eclipsing the gospel and the grace of God. Perhaps it’s time to take a closer look at what we mean by the “Law of God.”

But first let us consider the role of law in other areas of life.

The function of law

What would it be like to live in a community without laws? It may sound good to be free to do whatever we want to do. But others would be free do what they want to do too. They could murder, steal goods and people, including your girl friend, wife or child, burn your house down, steal your iPhone. And no one would stop them or order them to give things back. You would have to get yours back by force, if you could. And if it involved weapons, you could lose your life over an iPhone.

That’s what we call anarchy, and it’s the kind of situation that prevailed in theFrench Revolution. Does such a lawless society sound like a good idea?

We’ve had glimpses of brief periods of anarchy in recent revolutions around the world, and we know that it results in looting, killing and raping. That’s what happens when there’s no rule of law. And it helps us understand that law is necessary to protect the freedom and safety of citizens.

When we think about it, law is the foundation of any government. Without law, there is no government.

Law also reflects the character of the government in power – whether good or bad. Good rulers – whether individuals or democratic bodies – make good laws. Bad rulers make bad laws that benefit themselves and their cronies. Nevertheless, even in bad governments, laws provide at least some predictability and order.

If God has a Law – and we believe He does – is it not reasonable to conclude that God’s government reflects the character of God? 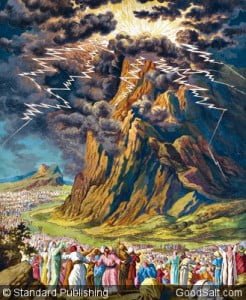 And that brings us to the Ten Commandments which God introduced from Mt. Sinai with billowing clouds of smoke, rolling thunder and flashes of lightning. When He had the people’s attention, He pronounced the ten precepts personally, in clear majestic tones, to a nation of some three million or so people. Not only that – but He wrote the Ten Commandments on tables of stone – twice! 1 Truly a singularity in human history and a demonstration of the importance  of this Law.

Are the Ten Commandments the eternal Law on which the government of God is founded? Were angels, who are not sexual beings, according to Jesus, told that they must “not commit adultery”? Were they told to “honor your father and your mother,” when they had no “mother”? Were beings adorned with riches beyond our imagination2 told they must not steal? Were the beings who live in the continual presence of God forbidden to make images of their resplendent Creator?

Sounds a bit ridiculous, when you stop to think about it, doesn’t it?

It seems that the Israelites were on to something profound when they summarized the Ten Commandments as two “great commandments,” as Jesus quoted them:

Jesus went on to observe, that “On these two commandments hang all the Law and the Prophets.” (Matt. 22:40 NKJV) His words imply that the Ten Commandments were but an expansion of the principles of the two “great commandments,” adapted to the needs of humanity. The “judgments” and all the other laws and subsequent instructions God gave to the people through Moses demonstrated the applications of the Ten Commandments, adapted to the culture of the time. Some applications would look different in our culture, but the principles remain as valid today as they were when given to Israel.

The first “Great Commandment” is expanded in the first four commandments of the Decalogue which spell out what loving God looks like: We put Him first in our lives, we relate to Him directly, instead of making images to “remind us” of Him and bowing before them, we don’t use His name carelessly in speech, nor do we knowingly misrepresent Him with our words or actions. And we reserve the day He blessed and sanctified at creation as special time with Him.

The second “Great Commandment” is expanded in the last six commandments of the Decalogue which spell out what loving others as ourselves looks like: We honor our parents, we avoid anything that damages or destroys the life that only God can give, we honor God’s design for sexuality and marriage, we respect the property of others, we are careful not to suggest anything false about our neighbors either by words or by silence, and we are thankful for what God gives us, instead of coveting what He gives to our neighbors. There’s more of course, and Jesus demonstrated in His own life what that “more” means.

One prophecy concerning Christ’s time on this planet was this: 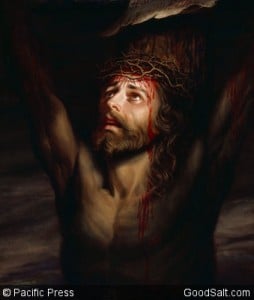 When He walked this earth in person, Jesus said that He had come not to destroy but to “fulfill” the Law.3

What it means to “fulfill” a law? It would certainly mean to do all that the law demands, and Christ did just that. In the process, He revealed the breadth and depth of the Law of God. He demonstrated that the heart of the Law is self-renouncing love that is willing to die that others might live. He demonstrated that the essence of the character of God is self-renouncing love. (1 Jn. 4:16)4

And because Christ had demonstrated the deeper meaning of the Law, He could give a new commandment – that we love one another as He has loved us. (Jn. 13:34) Not only did He give the commandment, but Jeremiah foretold that He would actually provide the means of fulfilling it. He would write His Law in the hearts of believers. (Jer. 31:31-33) 5 Until He demonstrated it in His own incarnation, even sinless beings could not fully understand the principles of God’s Law.

The Apostle Paul taught that love fulfills the Law of God.6 He also demonstrated that he understood what Christ had done when He wrote,

5 You must have the same attitude that Christ Jesus had.

6 Though he was God,
he did not think of equality with God
as something to cling to.
7 Instead, he gave up his divine privileges;
he took the humble position of a slave
and was born as a human being.
When he appeared in human form,
8 he humbled himself in obedience to God
and died a criminal’s death on a cross.
(Phil 2:5-8 NLT)

I also like the way another author puts it:

“In the light from Calvary it will be seen that the law of self-renouncing love is the law of life for earth and heaven; that the love which “seeketh not her own” has its source in the heart of God; and that in the meek and lowly One is manifested the character of Him who dwelleth in the light which no man can approach unto.” (Ellen G. White, Desire of Ages, p. 20)

“The law of life for earth and heaven.” That makes sense.  A law of self-renouncing love makes a lot more sense for angels than a law that tells them not to commit adultery. The Ten Commandments are, after all, the embodiment of the eternal Law adapted for the understanding of humanity.

The One, the Two, the Ten and the Many

The law of God thus can be thought of as the one eternal Law of self-renouncing love, adapted for man as the two principles of supreme love for God and unselfish love for humanity, further explicated as the ten great principles of the Ten Commandments. These principles were then spelled out in a way to adapt them to the culture of the time in the form of many civil laws and judgments for the people of Israel. (The principles in these laws and judgments are as valid today as they were when they were given.)

So we can think of the Law of God as the One great law, the Two great laws, the Ten great principles, or the many laws of application – the One, the Two, the Ten and the many.

When we discuss the moral law on which God’s government rests, it is helpful to remember that it comes in several manifestations. Confusing specific applications of the great eternal Law as the Law of God only serves to denigrate the eternal Law. That was the problem of the Pharisees of Christ’s day, as it is the problem of their modern counterparts. They mistook their own interpretations of the Law for the law itself and, in the process, transgressed the eternal Law of love and every principle of the Ten Commandments as well. Their modern counterparts still do the same.

The eternal Law, the law of self-renouncing love, is also the guiding principle in the life of the individual Christian. It is the spring of action from the renewed heart that only God can give. 7 It is the Christian’s power, fueled by the Holy Spirit. After all, if we accept Jesus as Lord, we necessarily accept His Law as the law of our lives. If we do not demonstrate self-renouncing love, we do not keep the law.

With our poor memory of things divine, we should often review Paul’s description of what the law of love looks like:

May we allow Him to write His law in our hearts so that others may see the Good News of the Gospel reflected in our lives.

Gays too must respect others’ opinion