The Catholic belief of “incorruptibility” holds that if a body does not decay after death, the person is holy. It takes two miracles to become a saint; the Church once allowed a perfect corpse to count as one.

Incorruptibility is no longer a miracle, however, perhaps because so many tried to help God along. Oil and herbs were inserted into the muscle cavities of some older popes, for instance.

When Pope Pius XII died in 1958, the Vatican used a wrapping technique similar to what was believed to have been applied to Jesus. It failed miserably. Only days after his death, his nose fell off, and a Swiss Guard fainted due to the stench while he was guarding the body.

What happens when people die? | State of the Dead

Pope John XXIII followed the reign of Pope Pius XII. After his death, John was treated with a simple formalin solution and placed in an airtight, layered coffin. It worked remarkably well — though the Church wouldn’t find that out until decades later.

In 1975, Monsignor Gianfranco Nolli, director of the Vatican’s Egyptian Museum, had an inspiration. After examining the excellent state of 4,000-year-old Egyptian mummies, he believed the Church could advance its treatments of popes and saints for the same effect.

The Vatican put together a team of researchers, which worked to update and improve the mummification process. Medical surgeons, pathologists, radiologists, anthropologists and microbiologists came up with a conservation treatment and began treating the newly deceased and bodies and body parts dating back as far as the 3rd century.

St. Teresa, who died in 1582, is an example of how obsessed earlier Catholics were with relics of the flesh. After her death, a priest cut off her left hand, from which he took a finger, wearing it around his neck for the rest of his life.

Followers later removed her heart, right arm, right foot and a piece of jaw to display as relics in various sites.

Much of her ended up in Rome. But in 1984, the church she was displayed in was robbed; the glass case containing her relics was shattered and her foot was stolen. It was returned days later wrapped in a communist newspaper.

The embalming team chemically treated the foot and placed it back in the reliquary, perhaps giving St. Teresa a bit of peace. The Dead in Christ Shall Rise First People dont go to heaven/hell when they die

In sacristies and other back rooms of churches, the team was sometimes given a pile of bones that they had to reconstruct before the sterilization process began. The scientific process was of course not without a bit of bureaucracy. In front of the body upon the opening of each casket they had to swear and sign an affidavit in the presence of the local bishop and a lawyer that they would not ruin or destroy the sacred body.

Even so, the process was sometimes remarkably casual. At times, team members stored relics in their own homes. One doctor assigned to treat the body of St. Fernando III, King of Spain, who died in 1252, transported his sacred vestments to Rome and brought them to the local dry cleaner.

The team’s most important task was Pope John XXIII. The pope, popular for his jovial nature, was considered pivotal because of his convening of the Second Vatican Council in 1962, which modernized the Mass, bringing in contemporary music and local languages instead of Latin.

After his death, he was credited for curing an Italian nun, who prayed to him when she developed a stomach tumor. Her healing, with no medical explanation, was his first miracle.

In 2000, Pope John Paul II had him exhumed to be declared “blessed,” part of the progression to sainthood. The airtight coffin had left him virtually undisturbed, and the embalming team wanted to keep it that way.

After the pope’s internal organs were removed and analyzed, the body was placed in a stainless-steel tub for several weeks in a solution of formalin and alcohol, then neutralized for several weeks. The DEMONIC Spirit of Mary in the Roman Catholic Church

His body then undertook a series of baths in assorted solutions for months at a time, including various mixtures of ethanol, methanol, phenol, camphor, nitrobenzene, turpentine and benzoic acid.

Finally the body was bandaged in linen cloths saturated with a solution of mercury bichloride and ethanol. Then a second team ensconced him with wax on his face and hands. The entire process took about a year. 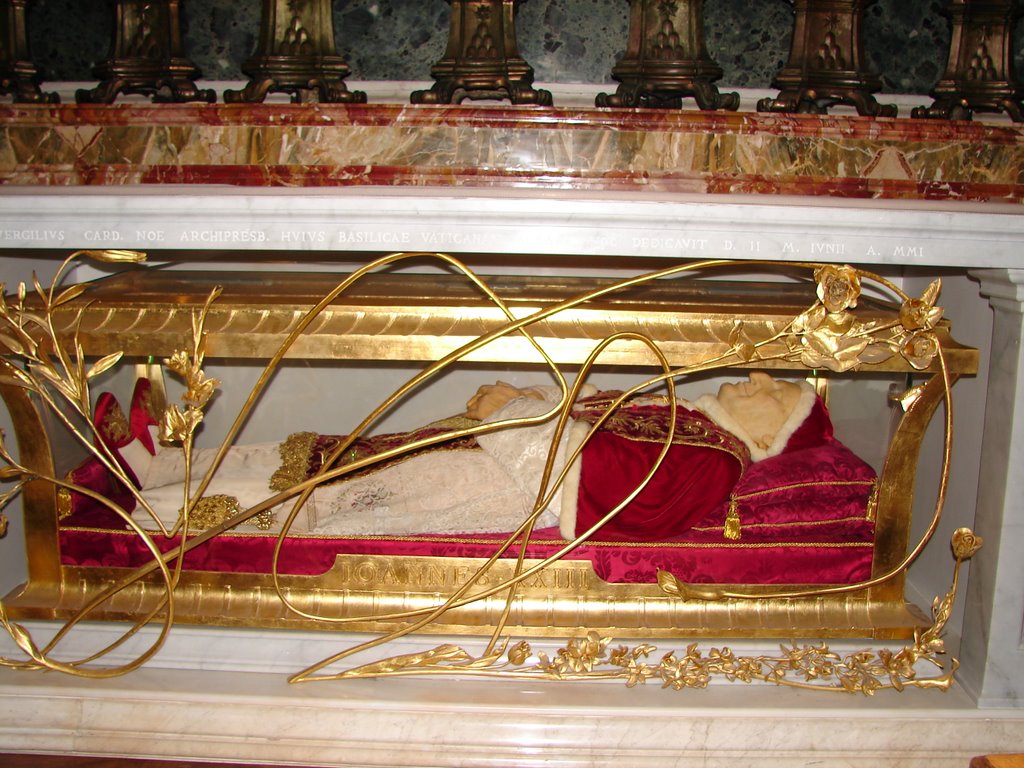 The Church decided not to rebury Pope John XXIII, instead putting him on display for pilgrims. More than 25,000 people visit St. Peter’s Basilica every day, and many faithful still believe the incorrupt state of his body is a miracle.

The Congregation for the Causes of Saints, a legal body inside the Vatican that analyzes witness accounts and oversees the legal measures required for sainthood, failed to recognize the pope’s bodily condition as a miracle — perhaps because the airtight container does not count as an act of God.