After truthfully and prayerfully reading this whole page, there is only one outcome you can surely arrive at! Now the question is – which is more important to you – your ‘church’, or God and His truth?

The purpose of this page is to seek the Bible truth as to what the Holy Spirit is. Is it a literal third 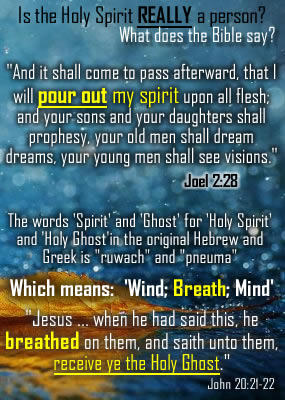 divine being of the Godhead as the trinity teaches, or is it the Spirit of God and Christ, ie. God’s and Christ’s own Spirit? Seeking the truth about what the Holy Spirit is can be very troubling for some people. So the one thing I ask is that you prayerfully read this page with an open mind, and let God and His Word be your guide to truth.

‘To stand in defense of truth and righteousness when the majority forsake us, to fight the battles of the Lord when champions are few – this will be our test’. (Review and Herald, Jan.11, 1887)

So what is the mainstream teaching concerning the Holy Spirit? The mainstream trinity teaching says the Holy Spirit is a third person of the Godhead and that there are three equal, co-eternal, co-existent Gods. Some believe that these three Gods are completely separate beings, whereas others believe that these three Gods are in fact one God, with three personalities. Explain that to a new believer!!?? We often hear the phrase “God the Father, God the Son and God the Holy Spirit”. By the words of the Athanasian Creed, upon which the Roman Catholic faith stands, it is“the Father is God, the Son is God, and the Holy Spirit is God, and yet there are not three Gods but one God.” Some churches differ on some points from orthodoxy but regarding the basic premise being the one God is ‘three gods in one’, it’s the same as the Athanasian Creed.

Consider these important points as we begin…

1 – There is not one mention of 3 beings in the Godhead in all the Old Testament, and the Holy Spirit is called the Spirit of God, ie, God’s own Spirit. The Bible does not even once use the term ‘God the Spirit’, but always the ‘Spirit of God’.

NOTE: The word ‘Elohiym’ is often used by trinitarians, saying this word means plural, therefore this must be the trinity. But this is not so. Not only is the number 2 (God the Father and Jesus Christ) plural, ‘us’, the actual meaning of Elohiym is ‘plural of majesty’, ie ‘a position of greatness’. And we can prove this from the Bible. When God spoke to Moses in Exodus 7:1, He said …‘I have made thee a god [Elohiym] to Pharaoh’. Was He telling Moses that He was going to make him 3 people to Pharaoh? No. God was telling Moses that He would make him ‘great’ before Pharaoh, ‘like a god’. So this proves Elohiym does not mean 3.

2 – The New Testament tells us that ALL the disciples baptized in Jesus’ name only.

4 – In Revelation 5, John is given a vision of the throne of God, and he sees a ‘Lamb, slain’, which is Jesus. And this Lamb has ‘seven eyes’ …which are the seven Spirits of God, sent forth into all the earth. This is a reference to the Holy Spirit. And who HAS this Spirit? Another separate ‘god’ from the Father and His Son? No, it is Jesus Himself who has this Holy Spirit to send to the earth.

5 – Paul confirms in Galatians 4:6 that God sends the Spirit of His Son [Jesus] to earth, NOT another separate being.

6 – Look at this other vision given to the apostle John regarding the New Jerusalem on the NEW EARTH …Revelation 21:22-23 …’And I saw no temple therein: for the Lord God Almighty and the Lamb are the temple of it. And the city had no need of the sun, neither of the moon, to shine in it: for the glory of God did lighten it, and the Lamb is the light thereof.’

How many divine beings do you see in the Godhead above? Two! Also, if you read Revelation 5:13, this also confirms that the whole universe gives praise and honour only to the Father and the Lamb (Jesus) for ever and ever! So do you want the truth? Then read on … 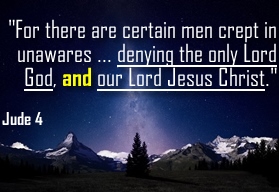 Important Point: The trinity teaching denies Jesus as the literal Son of God, because it teaches that Jesus is a self-existent, eternal God ALONGSIDE the Father, and not ‘begotten’ FROM the Father as a true Son. But please note, 1 John 2:22-23 says that he who ‘denies the Father and SON‘ is antichrist. So this subject may be a lot more important than people think. John 3:16 …’For God so loved the world, that he GAVE his only begotten Son, that whosoever believeth in him should not perish, but have everlasting life.’ God truly sent His own Son to die for our sins! What LOVE!

John 16:27-28 …’For the Father himself loveth you, because you have loved me, and have believed that I came out from God. I came forth from the Father, AND am come into the world: again, I leave the world, and go to the Father.’

John 17:7-8 …’Now they have known that all things whatsoever you have given me are of you. For I have given unto them the words which you gavest me; and they have received them, and have known surely that I came out from you, and they have believed that you did send me.’

Romans 8:3 …’God sending his own Son in the likeness of sinful flesh, and for sin, condemned sin in the flesh.’

Do you see this amazing truth about Jesus being the literal Son of God? And no, He did not become the Son of God at His birth on this earth. They are not play acting. This is real friends, and the truth is clear for all who have eyes to see. Notice the clear order that Jesus is giving. Hecame forth from the Father and THEN the Father sent Jesus HIS SON, to this earth.

1 John 5:5 …’Who is he that overcometh the world, but he that believeth that Jesus is the Son of God?‘

Proverbs 30:4 …’Who hath ascended up into heaven, or descended? who hath gathered the wind in his fists? who hath bound the waters in a garment? who hath established all the ends of the earth? what is his name, AND what is his son’s name, if thou canst tell?’

Here we are interested in what the Bible says, rather than what the majority believe, so we will use the WHOLE council of God as our authority on this doctrine of the trinity to find the truth. Let’s start off with a basic fact find concerning the Holy Spirit:

Basic Logic: Looking at the original Hebrew and Greek words reveal clear truth in many 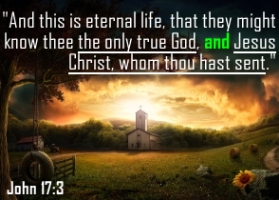 instances which the English translation doesn’t reveal. Take a look at this … ‘The Lord God‘ in the original Hebrew or Greek means ‘GOD, DEITY‘. ‘Jesus Christ‘ in the original Greek means ‘God is salvation’ and ‘THE ANOINTED ONE OF GOD‘, pointing to Jesus as the Son of God. So we have GOD and the SON OF GOD. Now look at the original meaning of ‘Holy Spirit/Ghost‘. In both the Hebrew and Greek it means ‘BREATH, MIND, ESSENCE‘.

Would you agree that the Godhead or so called ‘trinity’ doctrine is a ‘pillar’ of the church? It is one of the foundational teachings which you will find in the fundamental beliefs of churches around the world. Now a fundamental doctrineMUST be clearly supported by the Old Testament, otherwise there is no foundation to it. Let me give you an example. The doctrine of Jesus Christ as Saviour of the world. The doctrine of the sabbath, the law of God, the state of the dead, the truth about hell, and so on, are ALL clearly supported by the Old Testament. So what about the ‘trinity’? The Old Testament is SILENT!! Not one verse in the Old Testament supports the trinity teaching!

Above information taken from www.holy-trinity-of-god.com

So we have a huge problem with this trinity teaching in that it is not found anywhere in the Old Testament, and yet it is known as a ‘pillar’ of the Christian faith. I’m not just talking about the word ‘trinity’, I’m talking about the concept of there being three beings in the Godhead. Nowhere in the Old Testament is this idea supported. Now as we mentioned above, some people use the verse in Genesis where God says “let us make man in our image.” to support the trinity. But this is pure clutching at straws, because the ‘us’ in that verse does not mean three people. The word ‘Elohiym’ refers to a position of greatness, not the number 3. And anyway, since when did the word ‘plural’ HAVE to mean 3? Why not 4 or 5. Why not 100? Do we have 100 gods? No, we have to be Biblical and logical when looking at this. Elohiym refers to TWO people, God the Father and Jesus Christ His Son. That is the ‘us’. And that is Biblical.

DID YOU KNOW? – The 3 horns (tribes) that the little horn (the Papacy) destroyed in Daniel 7 were the Heruli, Vandals and the Ostrogoths. And these 3 tribes supported Arianism. Do you know what Arianism is? It is a NON-trinitarian faith. So the Roman Catholic Church destroyed these 3 tribes who opposed the Catholic trinity and now the whole world ‘wonders after the beast’ and follows the Catholic trinity doctrine.Please Note: Many today say that Arius believed Jesus was a created being. But the problem is, the Roman Catholic Church destroyed practically all of Arius’ writings, so we do not know for sure what Arius believed, other than he rejected the trinity teaching. A lot of history has been CHANGED by the Roman Church, so do not trust everything you read.  Source End Times News