Islamic State militants in Libya claim to have committed a mass beheading of Coptic Christian hostages, according to a video posted on the group’s networks.

The video, released late Sunday night, shows several men in orange jumpsuits being led along a beach, each accompanied by a masked militant. The men are made to kneel and one militant addresses the camera in English before the men are simultaneously beheaded. 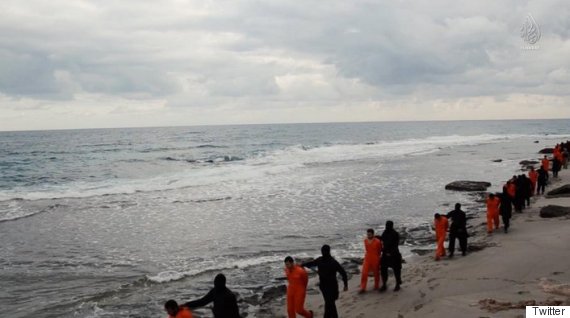 A still from the graphic video released by the Libyan group

The graphic video, which lasts five minutes, is captioned: “The people of the cross, followers of the hostile Egyptian church.”

Earlier on Sunday it was reported that gunmen from a different, al-Qaida inspired, militia have taken over radio and television stations in the central Libyan city of Sirte.

A security official said the seizure of the buildings happened on Thursday after militants from Ansar al-Sharia had warned the station to stop broadcasting music. Another resident said that the radio station had begun playing religious songs and lessons.

The group, considered a terrorist organization by the United States, is accused of being involved in a deadly 2012 attack on a US mission and annex in Benghazi. Its branch in the city of Derna has pledged allegiance to the Islamic State group.

On Saturday, a bomb hit a pipeline leading to the country’s largest oil field, al-Sarir, disrupting the flow of oil to ships at a coastal terminal, oil officials said.

The country’s post-Gaddafi transition has collapsed, with two rival governments and parliaments — each backed by different militias — ruling in the country’s eastern and western regions. The elected parliament was never allowed to properly convene due to a takeover of the capital, Tripoli, by Islamic and tribal militias. That parliament has been forced to function in the eastern city of Tobruk, while the pre-election parliament has declared itself legitimate and remains in Tripoli.