The principal of an Islamic school has come under fire after he reportedly banned girls from running, amid fears it would cause them to lose their virginity.

Former teachers of Al-Taqwa College, in Melbourne’s outer western suburbs, claim in a letter sent to the state and federal education ministers that principal Omar Hallak was discriminating against female students.

The Age reported that the Victorian Registration and Qualifications Authority is currently investigating the allegations.

This comes a month after revelations that Mr Hallak was telling students at his school that Islamic State was not ‘created’ by Muslims, but was instead a plot against them by the West.

The letter sent to ministers by a former teacher this week about the girls not being able to fully participate in sport claimed Mr Hallak believes there is ‘scientific evidence’ to back his claims.

‘The principal holds beliefs that if females run excessively, they may ‘lose their virginity’,’ the letter said.

‘The principal believes that there is scientific evidence to indicate that if girls injure themselves, such as break their leg while playing soccer, it could render them infertile.’

The principal of Al-Taqwa College banned female primary school students from participating in the 2013 and 2014 cross country district events, the teacher also claimed. 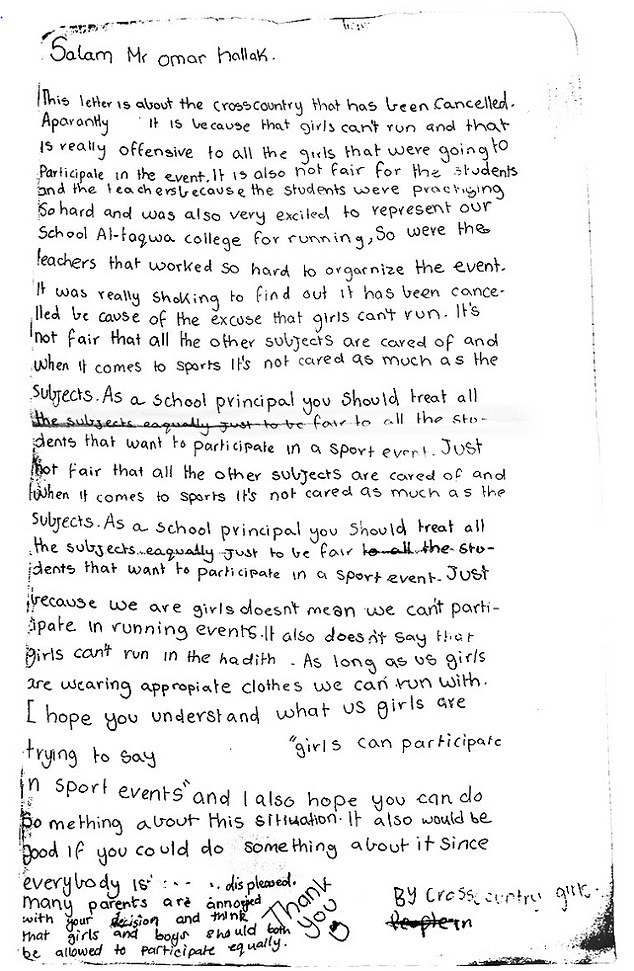 A group of students wrote this letter to Mr Hallak when they discovered they had been banned from competing, and asked him to be ‘fair’

They said the principal had been unaware that the female students were training for the event, and got involved when he was notified.

When they found out they had been prevented from competing, a group of female students penned a letter to their principal asking him to let them compete.

‘This letter is about the cross country event that has been cancelled’, the letter from ‘cross country girls’ read.

‘Apparantly (sic) it is because girls can’t run and that is really offensive to all the girls that were going to participate in the event.

‘As a school principal you should treat all the subjects equally just to be fair to all the students that want to participate in a sport event’, the letter continued.

Share
Facebook
Twitter
Pinterest
WhatsApp
Previous articleMuslim youths attack 14yr old child and set him on fire because he is a Christian
Next articleLesbian Teacher: How I indonctrinate kids to accept gay ‘marriage’, starting at 4 yrs old
Bible Study
Join us on Facebook or Follow us on Twitter by clicking on the icons to get more updates. Have a question? Join our Forums and lets discuss. Consider sharing this article. It's that simple to spread the gospel. God bless you.