Daniel 7:17 …..’These great beasts, which are four, are four kings, which shall arise out of the earth.’

Daniel 7:23 …..’Thus he said, The fourth beast shall be the fourth kingdom upon earth.’

Daniel 7:2-3 …..’Daniel spake and said, I saw in my vision by night, and, behold, the four winds of the heaven strove upon the great sea. And four great beasts came up from the sea, diverse one from another.’

Wind in Bible prophecy is a symbol for war and strife. Water is a symbol for peoples / nations (see Rev. 17:15). So these beasts (kingdoms) rose to power from wars and conflicts between nations. Now we can easily identify these kingdoms if we just look at what nations came to power after Babylon. Babylon is the first, as it was the ruling kingdom in Daniel’s day, so we need to find out the other three. Let’s look at the beasts:

The Lion (Daniel 7:4) – This is Babylon, the first kingdom which was the ruling power in Daniel’s day. History depicts Babylon as the greatest nation, which fits the “Lion”, which is the greatest beast. In Ezekiel, you will see Babylon being described as a “great eagle, with great wings”. God gave Babylon it’s great power, but Nebuchadnezzar exalted himself and God took the power away from Babylon, depicted with the wings being “plucked off”. The next kingdom is ready to take control:

The Bear (Daniel 7:5) – This is Medo Persia. You will see from the Bible verse that this beast was raised up on one side. History tells us that Medo Persia was two kingdoms rolled into one, with Persia being the stronger side, hence the bear being raised up on one side. The bear also has three ribs in it’s mouth, a symbol of it devouring something. And history tells us that Medo Persia “devoured” the three kingdoms of Lydia, Egypt and Babylon to gain control. Daniel 7-Awesome Beasts of Prophecy

The Leopard (Daniel 7:6) – This is Greece. This is an interesting choice of animal, because a leopard has great speed, plus it also has four wings. Now history tells us that Alexander the Great conquered the world as it was then and overcame Medo Persia as the ruling power with great speed, hence the leopard with 4 wings. From the Bible verse you will see this beast also has four heads. These four heads represent 4 kings that would control this nation. History confirms that greece split into four divisions, with 4 generals leading it, after the death of Alexander.

The Terrible Beast (Daniel 7:7) – This is Rome. Daniel sees such a terrible beast/kingdom, that he cannot describe it, only as “dreadful and terrible”. This certainly fits Rome, as Rome was a “terrible” kingdom in the way it treated people. This beast also has iron teeth, which matches Rome as being the “Iron” nation. This beast also has ten horns, and history confirms that Rome split into the ten nations of Europe when it fell in 476AD. It is also described as being “diverse” (different) from the other kingdoms. Now we all know what happened to Rome when Roman Emperor Constantine moved to constantinople, which is in modern day Turkey. He handed civil power over to the Catholic Bishop of Rome, therefore making Rome a religio-political kingdom.

So these are the four beasts, representing the four kingdoms from Babylon. Now the antichrist little horn comes up out of the fourth beast, which is Rome and we will now focus on identifying the little horn power.

Who is the Little Horn Power?

From studying the beasts above, we learned that the ten horns of the fourth beast represented the ten kingdoms of Europe. Therefore this little horn must also be a “kingdom”. And what is the first identifying feature of this little horn? It’s LITTLE !! Does this fit the Roman Catholic Church? Yes, because the Vatican state is it’s own country. It’s the smallest kingdom there is! Let’s see what else Daniel says about this antichrist little horn power:

Daniel 7:8,21,25 …..’I considered the horns, and, behold, there came up among them another little horn, before whom there were three of the first horns plucked up by the roots: and, behold, in this horn were eyes like the eyes of man, and a mouth speaking great things. I beheld, and the same horn made war with the saints, and prevailed against them. And he shall speak great words against the most High, and shall wear out the saints of the most High, and think to change times and laws: and they shall be given into his hand until a time and times and the dividing of time.’

Little horn comes up among other horns – Well, the first thing we notice, apart from this horn (kingdom) being little, is the fact that it came 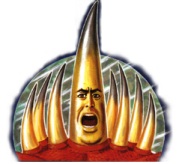 Speaking of the time, about 500 A.D., when the Roman Empire was crumbling to pieces:] “No, the [Catholic] Church will not descend into the tomb. It will survive the Empire . . . At length a second empire will arise, and of this empire the Pope will be the master–more than this, he will be the master of Europe. He will dictate his orders to kings who will obey them.” — (Andrea Lagarde, The Latin Church in the Middle Ages, 1915, p. vi) Quotes of Roman Catholic Persecution

Little horn has eyes like a man and speaks against God – What could the “eyes like a man” mean, concerning the antichrist little horn? Well, it could point to the fact that this little horn kingdom would have a very prominent figure (person) at the head of it. This fits with the Pope of the Catholic Church. Daniel also confirms that the little horn power speaks great things “AGAINST” the Most High, Creator God. Just take a look at a few quotes below that come from the Roman Catholic Church:Papal Claims to Authority The Pope is as it were God on earth

“The pope is of so great dignity, and so exalted, that he is not a mere man, but as it were God.” (Ferraris Ecclesiastical Dictionary)

“The Pope and God are the same, so he has all power in Heaven and earth.” (Pope Pius V, quoted in Barclay, Chapter XXVII, p. 218, Cities Petrus Bertanous)

The Papal Church of Rome certainly quote great pompous words against our Heavenly Father and Christ Jesus our Saviour. No man on earth is equal to any angel, let alone Christ Jesus. These blasphemous words are nothing but evil. If you would like see more astonishing quotes from the Catholic Church, please download the file from Catholic Church Quotes

Little horn makes war with the saints – Continuing to identify this antichrist little horn power, we see that Daniel confirms this little horn makes war with the saints and wears them out. Now it is a well known historical fact that the Roman Catholic Church, during the dark ages persecuted and murdered tens of millions of Christians who chose to obey God, rather than the Roman Catholic Pope. It is stated that the Papal Church of Rome has shed more blood than any other institution that has ever existed. The Catholic Church even had people murdered for just owning a Bible!!

“From the birth of popery to the present time, it is estimated by careful and credible historians, that more than fifty millions of the human family, have been slaughtered for the crime of heresy by popish persecutors,–an average of more than 40,000 religious murders for every year of the existence of popery to the present day. Of course the average number of victims yearly, was vastly greater, during those gloomy ages when popery was in her glory and reigned despot of the world; and it has been much less since the power of the popes has diminished to tyrannize over the nations, and to compel the princes of the earth, by the terrors of excommunication, interdiction, and deposition, to butcher their heretical subjects.” (John Dowling, The History of Romanism, pp. 541-542)

The leaders of this antichrist church have certainly got a lot to answer for!

Pope Francis unites Catholics and Methodists, who is next?

Little horn thinks to change law – The next identifying mark of this little horn power, is the fact that it “thinks to change times and law”. What times and law is Daniel referring to? God’s time and law of course. Now there is only one institution pompous enough to “think to change times and law”, God’s law, and that is the Roman Catholic Church. Does God’s law contain anything to do with time? Yes, the fourth commandment concerning the Sabbath Day, which God commanded a “time” for us to rest and spend with Him each week. God specifically says that the Sabbath Day is the seventh day of the week. And what does the Catholic Church claim to have done? They claim they have the power to change the Sabbath from the seventh day to the first, and that is exactly what they did. And most of the Christian world follows them by keeping Sunday as the Sabbath day. Not only that, but they also changed the second of the Bible ten commandments, so that they could make and worship idols, which God clearly forbids! Take a look a this pompous quote:

What does this quote mean? It means that this antichrist little horn power, the Roman Catholic Church, believe they are NOT bound by the authority of ALMIGHTY GOD! This CANNOT be the church of Christ Jesus. That sort of self exaltation can only come from Satan.

There can be no doubt, when comparing the Word of God concerning the little horn power with history, that the ONLY institution or kingdom to match the indentifying marks of the little horn, is none other than the Papal Church of Rome, known as the Roman Catholic Church. It’s a PERFECT match! And the great protestant reformers also knew this truth about the little horn power.