God Both Ordained & Approves of Marriage

The warmth of true friendship and the love that binds the hearts of husband and wife are a foretaste of heaven. (1)

God has ordained that there should be perfect love and perfect harmony between those who enter into the marriage relation. Let bride and bridegroom, in the presence of the heavenly universe, pledge themselves to love each other as God has ordained they should. (2) 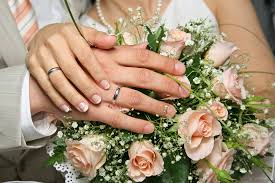 Man was not made to dwell in solitude; he was to be a social being. Without companionship the beautiful scenes and delightful employment’s of Eden would have failed to yield perfect happiness. Even communion with angels could not have satisfied his desire for sympathy and companionship. There was none of the same nature to love and to be loved. (3)

God Himself gave Adam a companion. He provided “an help meet for him”[Genesis 2:18]–a helper corresponding to him–one who was fitted to be his companion, and who could be one with him in love and sympathy. Eve was created from a rib taken from the side of Adam, signifying that she was not to control him as the head, nor to be trampled under his feet as an inferior, but to stand by his side as an equal, to be loved and protected by him. A part of man, bone of his bone, and flesh of his flesh, she was his second self, showing the close union and the affectionate attachment that should exist in this relation. “For no man ever yet hated his own flesh; but nourisheth and cherisheth it.”[Ephesians 5:29]. “Therefore shall a man leave his father and his mother, and shall cleave unto his wife: and they shall be one.”[Genesis 2:24] (4)

God celebrated the first marriage. Thus the institution has for its originator the Creator of the universe. “Marriage is honourable”[Hebrews 13:4]; it was one of the first gifts of God to man, and it is one of the two institutions that, after the Fall, Adam brought with him beyond the gates of Paradise. When the divine principles are recognised and obeyed in this relation, marriage is a blessing; it guards the purity and happiness of the race, it provides for man’s social needs, it elevates the physical, the intellectual, and the moral nature. (5)

As the Creator joined the hands of the holy pair [Adam and Eve] in wedlock, saying, A man shall “leave his father and his mother and shall cleave unto his wife; and they shall be one”[Genesis 2:24], He enunciated the law of marriage for all the children of Adam to the close of time. That which the eternal Father Himself had pronounced good was the law of highest blessing and development for man. (6)

God made from the man a woman, to be a companion and helpmeet for him, to be one with him, to cheer, encourage, and bless him, he in his turn to be her strong helper. All who enter into matrimonial relations with a holy purpose–the husband to obtain the pure affections of a woman’s heart, the wife to soften and improve her husband’s character and give it completeness–fulfil God’s purpose for them. (7)

Jesus did not begin His ministry by some great work before the Sanhedrin at Jerusalem. At a household gathering in a little Galilean village His power was put forth to add to the joy of a wedding feast. Thus He showed His sympathy with men, and His desire to minister to their happiness.[John 2:1-11] (8)

He who gave Eve to Adam as a helpmeet, performed His first miracle at a marriage festival. In the festal hall where friends and kindred rejoiced together, Christ began His public ministry. Thus He sanctioned marriage, recognising it as an institution that He Himself had established. (9)

The presence of Christ alone can make men and women happy. All the common waters of life Christ can turn into the wine of heaven. The home then becomes as an Eden of bliss; the family, a beautiful symbol of the family in heaven. (10)