In 1973, UN Secretary-General U Thant and New Age activist Donald Keys founded Planetary Citizens. This organization is now a UN-recognized non-governmental organization, “devoted to preparing people for the coming of the new culture.”

Donald Keys has been actively involved with the Findhorn Community in Scotland and writes regularly for its magazine One Earth. Findhorn promotes New Age teaching as “a spiritual community, ecovillage and an international centre for holistic education, helping to unfold a new human consciousness and create a positive and sustainable future.”

Planetary Citizens and the Findhorn Foundation are just two of the organizations connected to the United Nations that teach blatant New Age, Earth worship, and Luciferian doctrine.

Keys wrote this in One Earth:

The New Age groups are focusing and entering a new stage—a world related stage. They are becoming mature enough to begin to shoulder some of the load of humanity’s burden.

Lucifer prepares man in all ways for the experience of Christhood and the Christ prepares man for the experience of God…the light that reveals to us the path to the Christ comes from Lucifer. He is the light giver. He is aptly named the Morning Star because it is his light that heralds for man the dawn of a greater consciousness…He stands no longer as the tester or the tempter but as the great initiator, the one who hands the soul over to the Christ and from the Christ on into ever greater realms (emphasis added).

The Temple of Understanding

The Temple of Understanding (TOU) is a non-governmental organization with the goal of promoting understanding between religions. Founded by Juliet Hollister in 1960, the TOU endorses tolerance and “respect for religious pluralism” through its many international courses and programs. 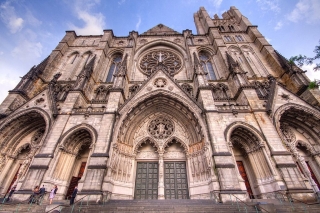 Cathedral Church of St. John the Divine, home of Templf of Understanding in New York….

The TOU webpage tells us that Eleanor Roosevelt “was among the first to endorse the concept,” saying, “our world surely needs the inspiration and leadership of such a ‘Spiritual United Nations’.”vii

Deeply connected with the United Nations, the Temple of Understanding “is dedicated to advancing social justice in the global context of today’s world by promoting the UN Millennium Development Goals.”x TOU also holds UN workshops and even a “life-changing” six-week UN internship for students to learn about the “inner workings of The United Nations.”

This article is adapted from Professor Veith’s Total Onslaught DVD The UN and the Occult Agenda.

Share
Facebook
Twitter
Pinterest
WhatsApp
Previous articleJehovah’s Witnesses – What’s this group and what are they about?
Next articleNicaraguan Minister Arrested After Woman Dies Following Alleged Fiery Exorcism Effort
Bible Study
Join us on Facebook or Follow us on Twitter by clicking on the icons to get more updates. Have a question? Join our Forums and lets discuss. Consider sharing this article. It's that simple to spread the gospel. God bless you.