“For although almost all churches throughout the world celebrate the mysteries on the Sabbath [7th day – Saturday] of every week, yet the Christians of Alexandria and at Rome, on account of some ancient tradition, have ceased to do this.” (Socrates, Ecclesiastical History, b.5, ch.22, found in Nicene and Post-Nicene fathers)

It is evident from the New Testament itself (Acts 16:13, Matthew 28:1, Luke 23:56), which we will confirm throughout this website, and from the many historical writings we have like above, that the true believers and followers of Jesus Christ kept the 7th day sabbath as per the 4th commandment. But as we can see above, the professed Christians in Alexandria and Rome did not keep the Biblical sabbath. Instead, they started keeping Sunday in honor of ‘some ancient tradition’. What ‘ancient tradition’ could this be?

After the city of Jerusalem was destroyed, Antioch in

Syria became the ‘capital’ of Christianity. From here, Bible truth as was handed down by God flowed from Antioch to the rest of the world. But Satan set up a counterfeit system in Alexandria and Rome. Alexandria was the place for worldly ‘learned men’, and was also the place where Jews were compromising with pagan philosophy. The city of Rome was the ‘world capital’ for paganism, which ended up influencing the church at Rome. Then, an alliance was made between Alexandria and Rome. So what was the result of this? The day of the sun god (Sunday) became the day to honor in place of God’s holy 7th day Sabbath.

Satan had inspired leaders and learned men in both Alexandria and Rome to exalt ancient tradition over Bible truth. Clement, the teacher of Origen, boasted that he would not teach Christianity unless it was mixed with pagan philosophy (Mosheim, Commentaries, cent.2, vol.1, p.341).

In the second century, the desires of the sun-worshiping Roman emperors and the Alexandrian theologians ran parallel. There was an ambitious scheme being devised by Satan himself to blend all religions into one, of which “the sun was to be the central object of adoration.” (Milman, The History of Christianity, vol.II, p.175-176). Pagan philosophy also had a big influence on the early church writers (also known as the ‘church fathers’), which Schaff confirms in his book ‘History of the Christian Church’, vol.II …

“We can trace it [Pagan Philosophy] in Clement of Alexandria and Origen, and even in Augustine, who confessed that it kindled in him an incredible fire.” (Schaff, History of the Christian Church, 2d Period, vol. 2, par. 173)

The bishops of Rome come into the picture and from the height of their pedestal of influence, push both the desires of the pagan emperors and the methods of Alexandria’s evangelism out to the world. A weekly holiday sacred to the worship of the sun, is honored instead of God’s holy 7th day Sabbath. 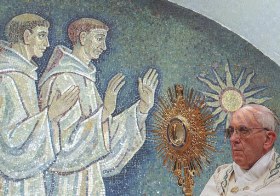 Victor I, bishop of Rome, entered into a pact with Clement [the teacher of Origen] around 190AD, to help make Sunday the prominent day of worship in the churches. Then as the Roman Church grew into power and dominance and God’s true church was driven into the wilderness, Sunday became the prominent day.

“The majority of bishops had (in the second century) decreed that the ‘feast of the resurrection’ could only be celebrated on a Sunday.” (Hefele, History of the Christian Councils, vol. 1, pp. 300-313)

Before Clement, there is no record of Sunday being called ‘The Lord’s Day’ – This is because the Bible says that Jesus is ‘Lord of the Sabbath’ [7th day]. Therefore the ‘Lord’s day’ according to the Bible is the 7th day Sabbath.

The bishop of Rome appealed to the popular desires of the day, be they ever so incorrect. Sunday was proclaimed to all the nations around the Mediterranean. And the bishops knew they had the backing of both Pagans and the professed Christians who had become worldly. By this the bishop of Rome would assert that he had the right to appoint holy days. And by this he would confuse and perplex other church communions more simple and scriptural than he. Only those who have read carefully the history of the growth of papal power will ever know how powerfully the controversy concerning Sunday worship served in the hands of the bishops of Rome.

The Church of the East declared with great spirit and resolution that they would not depart from the truths handed down to them via the scriptures. Then the thunders of excommunication from the bishop of Rome began to roar. The bishop of Rome broke communication with them, pronouncing the clergy of the East unworthy of the name of brethren, and excluded them from all fellowship with the church at Rome (see Mosheim, Institutes of Ecclesiastical History, b.1, cent.2, pt.2, ch. 4, par 11). This is when the gulf was created between the eastern and the western churches, a gulf which widened as the bishop of Rome grew in power.

And so through the scheming and brutal forces of Satan, the Papal Church of Rome becomes the only VISIBLE church in the world for centuries to come, as God’s true church is driven into the wilderness (Revelation 12:14).

Friends, this is where Sunday worship comes from. It does not come from the Bible, as you will see throughout this website. It comes from Pagan sun worship that the Roman Catholic Church adopted, ‘Christianized’ and literally forced upon the world. While the true Christians who kept the 7th day Sabbath of the 4th commandment were forced into the wilderness. Even the apostle Paul warned the church in his day that ‘wolves’ would come in, and that a ‘falling away’ from pure Bible doctrine would take place:

Acts 20:29 …’For I know this, that after my departing shall grievous wolves enter in among you, not sparing the flock.’

2 Thessalonians 2:3-4 …’Let no man deceive you by any means: for that day shall not come, except there come a falling away first, and that man of sin be revealed, the son of perdition; Who opposeth and exalteth himself above all that is called God, or that is worshipped; so that he as God sitteth in the temple of God, shewing himself that he is God.’

We can see in early church history just how this prophecy was fulfilled. Gnosticism began to rise up under the influence of philosophers, as we have mentioned above, and a great effort was made to reconcile Christianity with Paganism. At the same time, a strong anti-Jewish sentiment became more widespread, which added to the turning away from God’s true 7th day Sabbath.

We can also point to Emperor Constantine as a major contributor to SUN-day worship. His ‘supposed’ conversion to Christianity resulted in him being very zealous in building up the power and prestige of the church of Rome. Through his influence, great numbers of Pagans were adopted into Christianity, and as a result, their sun worship paraphernalia were brought in with them. And at this time, many Pagan customs were Christianized by the church of Rome so as to swell the ranks of the Roman church and make it more powerful.

As a result of the great adoration for SUN-worship. Constantine even enforced the very first Sunday law … “On the venerable Day of the Sun let the magistrates and people residing in cities rest, and let all workshops be closed.” (edict of Constantine, AD 321)

The Roman Catholic Church forcefully carried the tradition of Sunday throughout the world during the centuries that followed, and it became embedded into the various denominations that we now have today …

“But since Saturday, not Sunday, is specified in the Bible, isn’t it curious that non-Catholics who profess to take their religion directly from the Bible and not from the Church, observe Sunday instead of Saturday? Yes, of course, it is inconsistency but this change was made about fifteen centuries before Protestantism was born, and by that time the custom was universally observed. They have continued the custom even though it rests upon the authority of the Catholic Church and not upon an explicit text from the Bible. That observance remains as a reminder of the Mother Church from which the non-Catholic sects broke away like a boy running away from home but still carrying in his pocket a picture of his mother or a lock of her hair.” (John A. O’Brien, The Faith of Millions, p.400-401)

Dear friend, Sunday is not a sacred day according to the Bible or our God. Sunday was a day devoted to sun worship and was then adopted by the church to unite Paganism with Christianity. And as you read through this site, you will see that the true Sabbath day that is still in effect today is the 7th day, our Saturday.