The pagan system of sun worship had three main aspects: the father, mother, and the son. In ancient Chaldean times, these were the god Bel or Merodach, Ninus the son who was also worshiped as Tammuz, and the female goddess Rhea who was also worshiped as Ishtar, Astarte, or Beltis. She was also referred to as the “queen of heaven,” and the “wrath subduer.” Mary has received these same names in Catholicism. 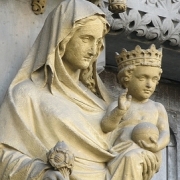 Mother and child worship was the basis of the ancient religions. In the various religions of the world, the same system of worship was perpetuated under different names. In Egypt , the mother and child were worshiped as Isis and Osiris or Horus, in India as Isi and Iswara, in China and Japan as the mother goddess Shing-moo with child, in Greece as Ceres or Irene and Plutus, in Rome as Fortuna and Jupitor-puer, or Venus and Adurnis, and in Scandinavia as Frigga and Balder. The mother and child were worshiped in Babylon as Ishtar and Tammuz, and in Phoenicia, as Ashtoreth and Baal. Moreover, the child was worshiped as both husband and son of the mother goddess.
The male component is a counterfeit of Jesus Christ. The Biblical names used for Jesus were also used for the child in ancient religions. Zoroaster was referred to as the seed, Mithra the Persian sun god was referred to as the Saviour, Dionysus as the sin-bearer, Bacchus as the branch, Vishna as the victim-man, and Osiris as the king of kings.

The Legend of Nimrod

The system of worship has its origin in the legend of Nimrod and his wife Semiramus. Nimrod (the great-grandson of Noah) rebelled against God, like his father Cush. Eventually Nimrod was put to death for his evil deeds, and according to the ancient patriarchal system, parts of his body were sent to various cities as a warning.
His wife Semiramus fled, but spread the rumour that he had ascended to heaven, where he had become one with the sun. When Semiramus later gave birth to a son, she claimed that it was the reincarnation of her deified husband, and that he had returned to save the human race.

She was later deified as the mother of the sun god, and it was supposed she had ascended into heaven as the queen of heaven. In the various cultures throughout history and around the world, the same basic deities have been worshipped under different names.

This site uses Akismet to reduce spam. Learn how your comment data is processed.