Moscow sent the deadly Iskander-M missile system on a civilian ship so it would remain undetected to the Russian enclave of Kaliningrad, according to Estonian media.

The move enhances Putin’s military influence on the continent as the enclave is situated between Poland and Lithuania.

Capable of striking targets 310 miles away and the ability to carry nuclear weapons, the missile launching system is far more sophisticated than anything the West has.

Estonia’s minister of defence, Hannes Hanso, said: “It’s certainly true that we have reason to keep our eyes open in the air, on the water, and everywhere else.”

But he would not give any further comment on the carrier. 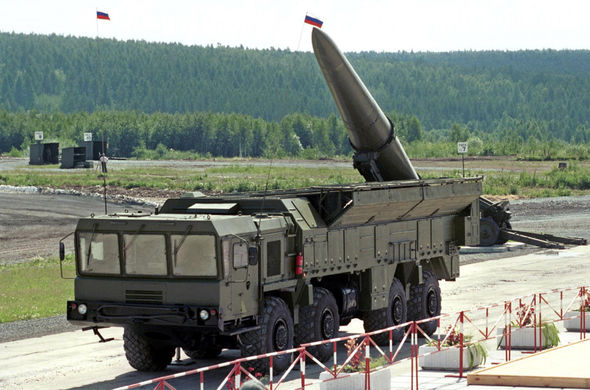 However US intelligence has confirmed Russia is manoeuvring the system.

An official added: “They moved a similar missile system to Kaliningrad in 2014 for a military exercise. It could also be a political gesture – a show of strength – to express displeasure with NATO.”

This is the latest public posturing by Putin after evacuating 40million people in a huge military drill.

The massive four-day “civil defence” drill has set alarm bells ringing in Washington and London, with tensions already high over disagreements in Syria.

Following a breakdown in communication between the US and Russia, the Kremlin has now organised the huge emergency practice drill – either as a show of force or something more sinister.  Full report

Share
Facebook
Twitter
Pinterest
WhatsApp
Previous articleLeaked Hillary Clinton speech to Foreign Bank: “My dream is a hemispheric common market with open trade and open borders
Next articleHurricane Matthew Death Toll Passes 800 In Haiti, Cholera Takes Lives
Bible Study
Join us on Facebook or Follow us on Twitter by clicking on the icons to get more updates. Have a question? Join our Forums and lets discuss. Consider sharing this article. It's that simple to spread the gospel. God bless you.