During the reign of the Papal Church of Rome, tens of millions of Christians were persecuted and killed because they refused to bow to the “authority” of the Papal Church. This reign of terror lasted 1260 years and was prophesied in Daniel 7 and Revelation 13. This will happen again when the mark of the Beast (Roman Catholic Church) is enforced. Below are quotes from history describing the most awful persecution at the hands of the Roman Catholic Church. These quotes are not to cause upset, but to EXPOSE the Papal Church for what it really is. 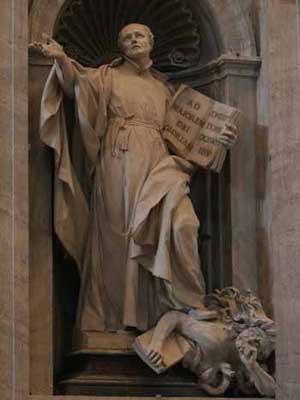 The above image is of a statue of Ignatius Loyola, the founder of the Jesuit order. In it you can see Loyola holding the Jesuit Constitution while trampling underfoot a Christian holding a Bible. And this statue resides at the Vatican TODAY! This isn’t just a statue that tells us about history. It is a statue in HONOR of what the Roman Catholic Church did to all those faithful Bible believing Christians. And that evil spirit still resides in the Catholic Church.

“On August 24, 1527, Roman Catholics in France, by prearranged plan, under Jesuit influence, murdered 70,000 Protestants within the space of two months. The Pope rejoiced when he heard the news of the successful outcome.” (Western Watchman, Nov.21, 1912 (Catholic)

“There was no village of the Vaudois valleys but had its martyrs. The Waldenses were burned; they were cast into damp and horrid dungeons; they were smothered in crowds in mountain caverns, mothers and babes, and old men and women together; they were sent out into exile in the winter night, unclothed and unfed, to climb the snowy mountains; they were hurled over the rocks; their houses and lands were taken from them; their children were stolen to be indoctrinated with the religion which they abhorred. Rapacious individuals were sent among them to strip them of their property, to persecute and exterminate them. Thousands of heretics or Waldenses, old men, women and children, were hung, quartered, broken upon the wheel, or burned alive and their property confiscated for the benefit of the king, and Holy See.” (Thompson – The Papacy and the Civil Power)

“That the Church of Rome has shed more innocent blood than any other institution that has ever existed among mankind, will be questioned by no Protestant who has a competent knowledge of history . . . It is impossible to form a complete conception of the multitude of her victims, and it is quite certain that no powers of imagination can adequately realize their sufferings.” (W. E. H. Lecky, History of the Rise and Influence of the Spirit of Rationalism in Europe, vol. 2, p. 32, 1910 edition)

“From the birth of popery to the present time, it is estimated by careful and credible historians, that more than fifty millions of the human family, have been slaughtered for the crime of heresy by popish persecutors,–an average of more than 40,000 religious murders for every year of the existence of popery to the present day. Of course the average number of victims yearly, was vastly greater, during those gloomy ages when popery was in her glory and reigned despot of the world; and it has been much less since the power of the popes has diminished to tyrannize over the nations, and to compel the princes of the earth, by the terrors of excommunication, interdiction, and deposition, to butcher their heretical subjects.” (John Dowling, The History of Romanism, pp. 541-542)

“The church may by divine right confiscate the property of heretics, imprison their person, and condemn them to flames. In our age, the right to inflict the severest penalties, even death, belongs to the church. There is no graver offense than heresy, therefore it must be rooted out.” (Public Eccliastical, Vol. 2, p.142)

Mr. Raywood Frazier, in the booklet ‘Catholic Words and Actions’, presents documentary proof of the intensive persecution of Protestants and non-Catholics in Columbia, South America, between 1949 and 1953. The Catholic Church had the support of the Columbian government in the destruction of many churches, and the liquidation of more than 1,000 documented cases — some of whom were shot, drowned, or emasculated. He says there is evidence of over 60,000 killed. Pope Pius XII awarded the President of Columbia with one of the highest awards which the Church bestows, and praised Columbia for its example of the Catholic faith. (Pp. 59,60)

“Their refusal to surrender the scriptures was an offense that the Papacy could not tolerate. The Papacy was determined to exterminate the heretics from the face of the Earth. The heretics greatest offense, was that they refused to worship God according to the will of the Pope. For this crime, the heretics suffered every humiliation, insult and torture that man could event.” (Fox’s Book Of Martyrs) Tortures: 1) Hanged and their genitals were cut off. 2) The mothers were whipped. 3) The women’s breast were ripped off. 4) They were tied up and fried in a large pan. 5) Their mouths were sewed shut. 6) They were placed into a pot of boiling water. 7) Their arms and legs were cut off. 8) Some had their eyes bored out.

On March 12, 2000, Pope John Paul II ADMITTED the Roman Catholic Church KILLED the Christians. This is the working of none other than Satan himself.

“The tragical sufferings of the Protestants are too numerous to detail; but the treatment of Philip de Deux will give an idea of the rest. After the miscreants had slain this martyr in his bed, they went to his wife, who was then attended by the midwife, expecting every moment to be delivered. The midwife entreated them to stay the murder, at least till the child, which was the twentieth, should be born. Notwithstanding this, they thrust a dagger up to the hilt into the poor woman. Anxious to be delivered, she ran into a corn loft; but hither they pursued her, stabbed her in the belly, and then threw her into the street. By the fall, the child came from the dying mother, and being caught up by one of the Catholic ruffians, he stabbed the infant, and then threw it into the river.” (Fox’s Book of Martyrs, Chapter IV, The Bartholomew Massacre at Paris, etc.)

You can see from just these few quotes of the Roman Catholic persecutions, that this church is NOT the church of Christ, but that of Satan. There is no other church or religion or institution that has such a “bloody” history like that of the Papal Church of Rome. And this history will be repeated when the mark of the Roman Catholic Beast is enforced. God told us that Babylon in Revelation 17 has the blood of the martyrs on her hands and He is calling His people out of Babylon. If you are still part of Babylon, then it’s time to heed God’s call to come out of her my people.

Share
Facebook
Twitter
Pinterest
WhatsApp
Previous articleWasn’t it only after the ten commandments were given that the sabbath day was being observed?
Next articleSeventh-day Adventist World Church vote statement on Transgenderism
Bible Study
Join us on Facebook or Follow us on Twitter by clicking on the icons to get more updates. Have a question? Join our Forums and lets discuss. Consider sharing this article. It's that simple to spread the gospel. God bless you.