The Pagan Origins Of Easter

The older European and pre-European holiday traditions were not based upon claimed religious phenomenon, but rather upon the seasonal characteristics of nature. The ancient traditions were founded by people who were highly aware of seasonal change and arranged their lives and festivities around them accordingly, explicitly marking the spring and fall equinoxes as well as the summer and winter solstices.

These periods acknowledged and celebrated the Sun god and its relation to society. The Sun god was seen as the provider of the energy for life from which they prospered, and was therefore given reverence. Even today Christians borrow extensively from pagan wisdom while otherwise slandering and misrepresenting paganism. If you go to a sunrise service on Easter, reflect for a moment about why the rising sun is an inherently powerful and appealing force to our inner spirit.


“Christianity did not destroy paganism; it adopted it.”
– Will Durant, “The Story of Civilization”

When Christians attempted to convert pagans from their traditional beliefs, the native people of Europe were initially resistant to discarding the beliefs and values that had guided them successfully for thousands of years. Realizing that it was difficult to get people to give up their relation to nature and the recollection of their past, the Christian conversion effort adopted and modified the pagan traditions, while replacing cyclical nature with an invisible, inert god and a personal, linear human idol to worship as its representation.

The chosen people of the Judeo-Christian God did not like the worship of nature and knew this would be harmful to the successful propagation of their beliefs.

In some translations the word “Gentiles” is replaced by “Heathens”, but the two words have the same meaning:

Gentiles. All the people who were not Jews were so called by them, being aliens from the worship, rites and privileges of Israel. The word was used contemptuously by them. In the New Testament Greek is often used as its synonym.

The word pagan is derived from the Latinpaganus, meaning one who lives in the country. Early conversion attempts occurred primarily in the city, thus giving rise to this distinction. Those who lived in the country were closer to nature and understood it better, making them less likely to forsake it. Because nature is the essence of life, someone who lives and studies among nature knows more truths about life than those who are separated from it and merely read about it in the cities.

Pagans were familiar with the cycles of nature that made life everlasting. Life and death were not considered personal ego-based conditions and feared as they are in Christianity, but were seen as stages of growth and decay through which everything living inevitably passes. Instead of being afraid and needing to be “saved” from life, pagans loved this world and lived with honor and respect so that they were able to have the best lives possible. The notion of a “better world” reached by dying was not their life’s goal. Instead, they believed in making this world better for each other and for their children. Here “better” does not concern itself with being meek or moralistic, but rather is focused on what is real and heroic in life, while also preserving its rich roots and heritage. This conception of life is that of a long chain to which every child is eternally connected and from which he inherits an entire history as his birthright.

Early first century Christian practices revolved around the Jewish Passover, which is the tradition of the Bible when the word pascha is correctly translated as Passover. However, a mix between the will of emperors and the resistance of the people to give up their traditions and nature-worship for foreign anti-natural beliefs came to sway Christianity towards the adoption of Easter. 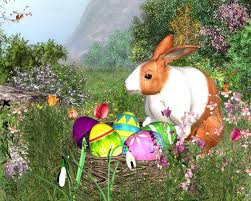 The name Easter comes from an ancient European goddess of the dawn called Eostre by the Anglo-Saxons and Ostara by the Germanic peoples. She is also known as Eostra, Eostrae, Eostar, Eastre, Easter, Estre, Eástre, and Austra by various European peoples. Her name means “movement towards the rising sun” and is related to the Indo-European root word Auswhich means “to shine”. The English wordsestrus and estrogen are also derived from her name. She was considered the goddess of the growing light and spring, associated with fertility and celebrated with a festival of rebirth.

One story has her entertaining children by performing a trick that changed her pet bird into a rabbit. This rabbit then laid colored eggs that she gave to the children. Given the history of these ideas which date back to at least 2000 years before the Christian era, it should be no surprise that the original symbols and practices of Easter persist today, just as our ancestors once celebrated them.

When Christian monks worked mendaciously to gain followers by destroying pagan history and defaming the elder gods as demons, they had no weapons to deface the innocence of Eostre. Instead, they adopted her holiday and attempted to graft their values onto it.

The blessings of spring were personified in the goddess Ostara, whose festival of Easter, is dear to the Germans after the long cold winters in the forest, is still called after her name, though the God of the Christians claims the worship once accorded to the spring. Ostara’s favorite animal was the hare, which to this day still brings the Easter eggs to the little children.
– Thomas Bulfinch, “The Golden Age of Myth & Legend”

As the Christians could offer nothing better, they simply claimed what existed as their own, changed the story slightly, and then tried to cover up and break people’s connection to the past.

Ostara, Eostre seems therefore to have been a divinity of the radiant dawn, of upspringing light, a spectacle that brings joy and blessing, whose meaning could be easily adapted to the resurrection-day of the christian’s God.
– Jacob Grimm, “Teutonic Mythology”

The 40 days of Lent can be traced to worship of the Babylonian fertility god Tammuz, as well as similar traditions in Egypt (Osiris), Syria (Adonis). There are answers hidden in the Biblical dislike for Tammuz:

So He brought me to the door of the north gate of the Lord’s house; and to my dismay, women were sitting there weeping for Tammuz.
– Ezekial 8:14 Each year, Tammuz’s death and resurrection were celebrated, despite the condemnation of the Judeo-Christian God. Tammuz’s wife was the goddess Ishtar who was worshiped in groves made of asherah which are trees trunks, a phallic symbol, that were raised on a hilltop and represented life. Though Christians destroyed all of the pagan holy grounds, often placing their churches on top of them and cutting down all nearby trees, the beliefs of the people did not immediately change. Even today, the lily remains a popular part of the Easter celebration, but its origins are that of a phallic symbol which represents the reproductive organs.

Tammuz and Ishtar were also worshiped under names such as Baal and Astarte, Attis and Cybele, and Adonis and Aphrodite. In an effort to stop the spread of this nature-based, sensual worship of life, the Judeo-Christian teachings condemned these gods, as well as a positive alignment with fertility and the cycle of life. In other words, the Judeo-Christians were openly opposed to nature and all those who worshipped the gods of nature:

So the children of Israel did evil in the sight of the Lord. They forgot the Lord their God, and served the Baals and Asherahs.
– Judges 2:7

Colored eggs have a variety of traditions. In some European cultures, they are used similarly to Valentine’s Day gifts as a way of indicating attraction to a desired mate. The egg also symbolizes cosmic creation which is consistent with its use in the spring festival of rebirth. A Babylonian legend even says that the goddess Ishtar hatched from an egg that fell from heaven.

Hot cross buns trace their origin to the ritual bread served at the feast of Eostre. The wordbun is derived from the Saxon word boun which means “sacred ox”. The cross represents the solar wheel and thus the pagan cosmology.

Showing that the past is not yet dead, the Yezidis of Koordistan are said to still practice the the tradition of Lent which they inherited from their Babylonian ancestors. 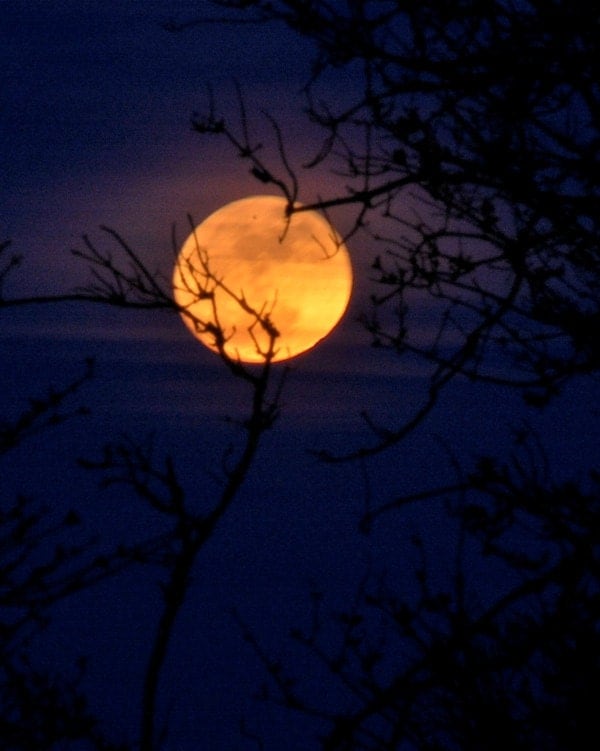 Most people are aware that the day of Easter moves each year, but few people remember the reason for this or the method of its calculation. When we celebrate Easter, it is the first Sunday after the first Vernal Equinox fullmoon. The Vernal Equinox signifies the astronomical arrival of spring and was considered the time to celebrate the rebirth and renewal as nature resurrects itself from the death it suffered in winter. The Sun that died at Yule is reborn!

It is outside of the scope of this sermon, but the Winter Solstice is the basis of Christmas, as well as the Christmas tree. There is truly little attributed to Christianity that is original, but to be fair it is difficult to conquer people sufficiently to destroy their traditions and instinctual feelings. This must be performed gradually by first coopting the traditions, slowly turning them against the spirit of the people, and then cutting the people off from their roots so they remain separated from their natural instincts and awareness of what is right.

If the symbols, image, and traditions of Easter seem incongruent with the message of those who promote the holiday, they may make more sense after you look into their nature-based pagan roots. Here you can gain hints from the aspects of the celebration that spoke to our ancestors. The same ancient spirit lives on in us today, only we have to uncover it and rediscover its meaning. In that way, we can find our past traditions preserved in Easter — and give them rebirth. 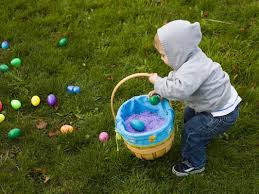 As for the Easter egg hunt, a fun game for kids, But there is a rather scary history to this. As with many elements of our “ancient history, “. But the story goes like this: Eggs were decorated and offered as gifts and to bring blessings of prosperity and abundance in the coming year; this was common in Old Europe. As Christianity rose and the ways of the “Old Religion” were shunned, people took to hiding the eggs and having children make a game out of finding them. This would take place with all the children of the village looking at the same time in everyone’s gardens and beneath fences and other spots.

It is said, however, that those people who sought to seek out Pagans and witches would bribe children with coins or candy , and once those children uncovered eggs on someone’s property, that person was then accused of practicing the old ways. Punishment back then was Death or Jail which usually ended in Torture or being Tortured to death to force Pagans to convert to Christianity In other Words Easter Eggs hunts were used to hunt Pagans and Witches by using Children to search for Eggs . Source

Being Christian is being Like Jesus-Go and sin no more

What Happens to Your Body when You Eat Watermelon Everyday(Video)