The TRUE purpose of Pope Francis, America and the Papal Church of Rome

Pope Francis is coming across as a ‘loving, compassionate’ person, and
yet conceals his TRUE agenda. Thankfully, God showed us through Bible prophecy the true purpose of the Papacy – and that is world domination, using the kingdoms of the earth to cause the people to give their allegiance to the Papal Church and ultimately to Satan himself. 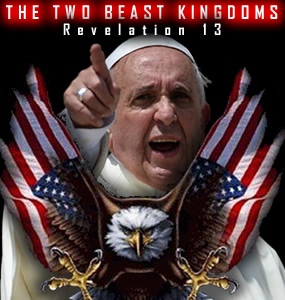 Look at these official statements from past popes and the Vatican:

“To be Christian one must be Roman; one must recognize the oneness of Christ’s Church, that is governed by one successor of the Prince of the Apostles, who is the Bishop of Rome, Christ’s Vicar on earth.” (Pope Pius XII, October 8, 1957; source)

“So the Christian is a Catholic as long as he lives in the body: cut off from it he becomes a heretic.” (SATIS COGNITUM, ENCYCLICAL OF POPE LEO XIII source)

These quotes show the TRUE motive behind pope Francis and the Papacy – Which is, for the whole world to submit to him and the Roman Catholic religion. And once he (or another pope) gains the power from the nations (Rev. 17:12-13) then we will see the TRUE colours of the pope and the Papal Church.

“When appearing as members of their order, they [the jesuits] wore a garb of sanctity, visiting prisons and hospitals, ministering to the sick and the poor, professing to have renounced the world, and bearing the sacred name of Jesus, who went about doing good. But under this blameless exterior the most criminal and deadly purposes were often concealed … Under various disguises the Jesuits worked their way into offices of state, climbing up to be the counselors of kings, and shaping the policy of nations.” (E.White, Great Controversy, p.234-235)

Revelation 13 shows us the outcome of America and the Papacy coming together!

This article was first published on End Times Update

In times like these, we need a savior. We live in a world where speaking the truth will put you...