It’s funny and also stupid how Catholics try to force Jesus into their pagan rituals and share the photos online to buy some cheap PR claiming to be the Church of God.

This has not happened once and it is not about to stop. There have been claims of idols that are meant ‘to be’ Jesus weeping, others have shown idols or a woman they claim to be Mary weeping. In another video, another fellow altered a video of a corpse Catholics worship and claimed he had blinked his eyes.

Now the latest stupid stunt is this claim of a photo trending that the face of Jesus projected on a surface next to a Catholic priest in Argentina.

The picture, which was published in local media and has gone viral online, was taken during a Catholic ceremony in the town of Caucete.

Worshippers had gathered in the town, not far from the Chilean border, to perform the novena, a ritual which consists of conducting religious prayers in public for nine successive days.

The photo was shared online by a local man named Favio Garay, who took part in the event.

The image shows a priest sitting at a table and apparently addressing people with a microphone.

To his left, there is a pagan idol but to his right is an image which they claim to be the face of Jesus Christ as seen in numerous paintings and catholic idols. 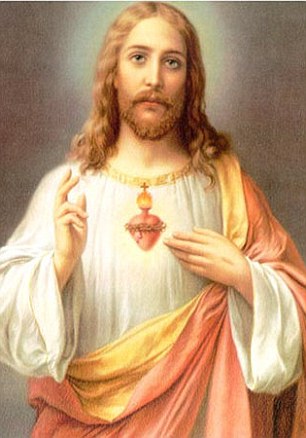 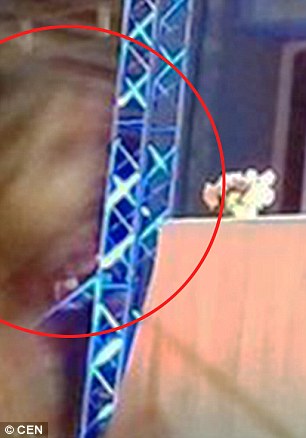 But many others believed it was a miracle, possibly brought about by the power of prayer.

Silvia Yacanto commented on social media: ‘This is incredible!’

Lili Peralta added: ‘This is it, friends, we need to share what’s good. It’s worth it!’

Maria Vega commented: ‘Beautiful photo. I’ll share it. It fills me with happiness.’

Is it not so stupid that they came up with this idols and now are using social media to actually claim their idols are a living God?

Eze_14:3  Son of man, these men have set up their idols in their heart, and put the stumblingblock of their iniquity before their face: should I be enquired of at all by them?

God hates idolatry so much that He made the first three commandments all about Him.

Exo 20:3  Thou shalt have no other gods before me.
Exo 20:4  Thou shalt not make unto thee any graven image, or any likeness of any thing that is in heaven above, or that is in the earth beneath, or that is in the water under the earth:
Exo 20:5  Thou shalt not bow down thyself to them, nor serve them: for I the LORD thy God am a jealous God, visiting the iniquity of the fathers upon the children unto the third and fourth generation of them that hate me;
Exo 20:6  And shewing mercy unto thousands of them that love me, and keep my commandments.
Exo 20:7  Thou shalt not take the name of the LORD thy God in vain; for the LORD will not hold him guiltless that taketh his name in vain.

First, do not think or worship or have other gods besides our Father in Heaven. Secondly do not make by way of idols, or paintings of anything to claim that thing is God and to bow or regard it as God. That is an insult to God! Thirdly, taking God’s name in vain not only includes swearing, but if am going to share around fake images and claim they are God, I am taking His name in vain.

In other words, one idol slashes the first three of God’s commandments, at this point, are you even a Christian?

Exo_23:13  And in all things that I have said unto you be circumspect: and make no mention of the name of other gods, neither let it be heard out of thy mouth.
Deu_5:7  Thou shalt have none other gods before me.
Deu_6:14  Ye shall not go after other gods, of the gods of the people which are round about you;

Deu 30:17  But if thine heart turn away, so that thou wilt not hear, but shalt be drawn away, and worship other gods, and serve them;
Deu 30:18  I denounce unto you this day, that ye shall surely perish, and that ye shall not prolong your days upon the land, whither thou passest over Jordan to go to possess it.

Rev 17:1  And there came one of the seven angels which had the seven vials, and talked with me, saying unto me, Come hither; I will shew unto thee the judgment of the great whore that sitteth upon many waters:
Rev 17:2  With whom the kings of the earth have committed fornication, and the inhabitants of the earth have been made drunk with the wine of her fornication.
Rev 17:3  So he carried me away in the spirit into the wilderness: and I saw a woman sit upon a scarlet coloured beast, full of names of blasphemy, having seven heads and ten horns.
Rev 17:4  And the woman was arrayed in purple and scarlet colour, and decked with gold and precious stones and pearls, having a golden cup in her hand full of abominations and filthiness of her fornication:
Rev 17:5  And upon her forehead was a name written, MYSTERY, BABYLON THE GREAT, THE MOTHER OF HARLOTS AND ABOMINATIONS OF THE EARTH.

Share
Facebook
Twitter
Pinterest
WhatsApp
Previous articleHashtag ‘Israel is burning’ trends on Arab social media
Next articleFrance on the Verge of Total Collapse
Bible Study
Join us on Facebook or Follow us on Twitter by clicking on the icons to get more updates. Have a question? Join our Forums and lets discuss. Consider sharing this article. It's that simple to spread the gospel. God bless you.