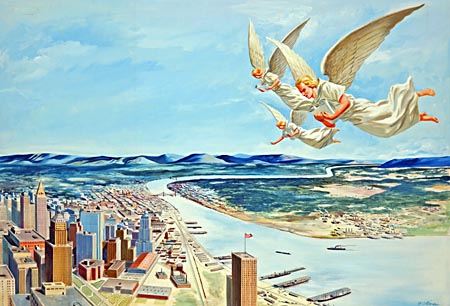 “And I saw another angel fly in the midst of heaven, having the everlasting gospel to preach unto them that dwell on the earth, and to every nation, and kindred, and tongue, and people” Revelation 14:6.

Who is this first angel and who are the three angels?1

Revelation 1:20 says that the seven stars are the seven angels of the seven churches. So an angel would be like a leader or messenger to a church. Jesus begins His message to each church with, “Write unto the angel of the church of…” so He must be referring to an angel as being a terrestrial leader. When John saw the seven stars in Jesus’ hand, those stars were the angels, or ministers and leaders of the church.

Jesus calls us all to have a ministry in the church and a message to share with the world, and it’s comforting to know, that while we are messengers for Jesus,  He holds all of us in His hand. Wherever in the world you are reading this – whether in a country with few Christian churches, and even persecution, or whether you are trying to share Jesus with your family members who all seem opposed to your message – rest assured, Jesus has you right in His hand and you are very special to Him! He will take care of you and make your ministry prosperous. You may find your ministry in a difficult place, but it is right in Jesus’ hands.

The Seventh-day Adventist church has a very important message to give to the world, so let’s see what it is.

The first angel has the everlasting gospel.

Now don’t all churches have the gospel? Yes, many people will be in the kingdom because a Baptist, Methodist, Catholic or Lutheran etc. missionary shared the love of God with them. However, as the book of Revelation changes scenes from the dark ages to the earth being “lightened with His glory” the gospel will be shining brighter than ever before.

The everlasting gospel which the Seventh-day Adventist church shares overcomes the legalism of Babylon. This last message is filled with grace and the glory of God and not the works of man. It shows the love of God more clearly than the gospel presented by most other churches.

Many churches preach that sinners will be eternally tormented in hell while John 3:16, which is the crux of the gospel, says that sinners will perish. Romans 6:23says the wages of sin is death, not eternal torment in hell. It’s impossible to fall in love with a God who has a “love-me-or-I’ll-torment-you-for-eternity-in-hell” mentality. While sin and those who cling to it at any cost must perish, God will not be delighting in their eternal torture. The punishment, which is death, is eternal; the punishing is not.

Many churches focus on the physical torture Jesus endured. The physical torture  was terrible, but Jesus suffered way more than a six-hour pain endurance marathon. Hebrews 2:9 tells us Jesus “tasted death” for all men. It obviously was not the death of the righteous that He tasted; we all taste that first death for ourselves. Obadiah 16 tells us the wicked will be as though they never were. Jesus faced more than nail-scarred hands and feet on the cross. He tasted the death of the wicked, which means He experienced total separation from God. This could be why He was crying out, “My God, My God, why have You forsaken me?” instead of singing hymns of praise while He died, like John Huss did. You see, Jesus died a totally different death than John Huss. John Huss died the death of the righteous while he burned at the stake for his faith. Jesus was dying the death of the wicked.

Many teach that Jesus saves us in our sins while Matthew 1:21 tells us clearly that Jesus will save us from our sins. We can’t call Jesus a Savior unless He actually saves us, and according to Ephesians 2:1-10 we are saved by grace. What His grace saves us from is our sinful life.

So we see, Seventh-day Adventists not only teach a different day of worship, we also teach the fullness of the gospel. Our job description, in being messengers for Jesus, is to let the whole world know the love of Jesus.

You don’t have to be a TV evangelist to have a ministry and share this message. This gospel is so amazing that many will not even believe it when they hear or read about it. However, they will believe it when they see these principles of self-sacrificing love manifested in your life.

I remember a story about a man who was married for 50 years. At breakfast he always insisted on having the heel of the bread loaf for toast. He acted as though it was his favorite part of the bread. Fifty years later after his wife died, he stopped eating the heel. His nephew asked him why he didn’t like it any more. The old man explained that he never did like it. He just knew his wife did not like it either, so for fifty years he pretended he loved it so she would not have to eat it. That made a great impact on the nephew, and it helped him understand the gospel better than any evangelist preacher ever could.

The first angel teaches about judgment

Saying with a loud voice, Fear God, and give glory to him; for the hour of his judgment is come: and worship him that made heaven, and earth, and the sea, and the fountains of waters. Revelation 14:7

This angel is telling us of the judgment which began in 1844. Interestingly the angel says the hour of His judgment has come. What does this mean? It means God is the one being judged!

The judgment is not to see if God will accept us, Ephesians 1:6 tells us we are already accepted in the Beloved. The judgment is to see if we will accept God. Seventh-day Adventists preach a time of probation, but many do not realize that it is actually God who is on probation. God is being judged by the universe: Is God the mean control freak and tyrant that Satan makes Him out to be, or is He a God of love? Is God a good God or some psychopath saying, “Love me or I’ll kill you?”

Satan first attacked the character of God in heaven. Revelation 12 says there was war in heaven, but not with machine guns and tanks; it was a battle of the minds. Satan wanted God’s power but not his character.

I can see Satan playing mind games with the angels. I can see him going up to one of the other angels and saying, “You did a great job on that project God gave you. Did God give you any special recognition for it? He didn’t? Why that’s too bad. You know if I was God I would have thrown a banquet in your honor.”

And so Satan started these mind games trying to make the angels believe that he should be God and that God was not a God of love who was interested in their welfare.

Satan got a third of the angels to buy his lie. There may have been some angels who stayed in heaven but were not convinced who was right or wrong, until the cross. Then the whole universe saw the true character of Satan, who was willing to kill anyone who got in his way of being number one, contrasted with the true character of God who was willing to die on a cross and say goodbye to life forever to save others.

In Egypt the king made all the Hebrew slaves work so he could rest. God delivered the Hebrews from their works and gave them the Sabbath, explaining that it was God who created and made everything and did all the work so theycould rest. God is reminding Israel that He saved them from the slavery of the Egyptians, and that it was not their works that saved them. Likewise God Himself will save us from the slavery of sin, by His grace and not by our works.The Sabbath is clearly a sign that it is God who sanctifies us and not our own works. We see this also in Exodus 31:13. We rest from our works on the Sabbath, remembering that our salvation comes from resting our faith in His amazing grace and not in trusting our works to save us.

The Sabbath also reminds us of our Creator whom Satan wants us to forget. If the Sabbath had never been forgotten, atheism would never exist. For example we use the sun to mark a year, the moon marks a month and the earth’s rotation marks a day, but what do we have to mark a week? The only thing we have to mark a week is the creation week which ends with the seventh-day Sabbath. So how do atheists explain the seven-day week?

During the reign of terror the French tried to do away with the seven-day week and replace it with a ten-day week. This did not work.

Share
Facebook
Twitter
Pinterest
WhatsApp
Previous articleAdventist family among victims of Nairobi terror attack
Next articlePopes John Paul II, John XXIII To Become Saints Next April
Bible Study
Join us on Facebook or Follow us on Twitter by clicking on the icons to get more updates. Have a question? Join our Forums and lets discuss. Consider sharing this article. It's that simple to spread the gospel. God bless you.