George Soros is the self-loathing Jew who said his happiest days were spent with his father ratting out other Jews to the Nazis. Soros also has let everyone know how he feels about the US:

“The main obstacle to a stable and just world order is the United States.”

That means the US must be taken down, and who better to do it than Barack Obama and Hillary Clinton?

In his address to the UN, Obama publicly endorsed and proposed the idea of a global government over what we have today. He says that could be the solution to lasting peace, victory over climate change, poverty and all that stuff they blame their evils on. 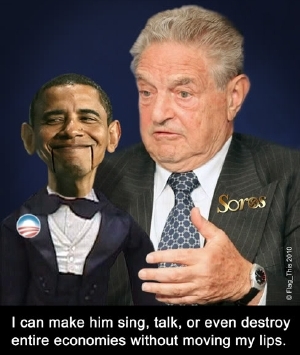 Clinton, in a leaked speech that she delivered says her dream is for ‘open borders’ and ‘hemispherical common  markets’.

Soros on refugees and national borders:

“Our plan treats the protection of refugees as the objective and national borders as the obstacle.”

Frightening. Soros is working toward eliminating national borders in Europe and obama is working on eradicating them in America.

Last month, Soros ‘donated’ 500 million USD to support the refugee crisis. On his part, Obama has broken the law to grant protected status to Syrian refugees in the US.

If you think about it, this explains why Obama won’t solve the problem of ISIS and instead treats the hemorrhage with a knife. Obama does not want to stem the migration. He wants it to continue. He is doing Soros’ work. And thus so is Clinton.

Newly leaked documents from the Open Society foundation by site DC Leaks show the organized web of funding that George Soros and Open Society have become infamous for. One particular report shows funding for an initiative to promote the image of Somalians in Europe who, according to the report are in the top ten most discriminated people on the continent. According to the foundations the real problem is the image of Somalians in the media and not the problems that have led to the creation of that image.

This explains many of Barack Obama’s actions- not enforcing border laws, importing as many Syrians as possible, rewarding illegal immigration and not deporting illegal alien criminals.  It’s why Obama is sidestepping Congress on nuclear arms and threatens to do so with the TPP. Obama is in on the party. It’s why the crimes being committed by “migrants” and illegals are being buried and in Germany, flat out denied.

Soros has invested $8 million in her and subsequently issued her marching orders.

A series of message within the September 2015 State Department dump of Hillary Clinton e-mails show the Secretary of State of the United States received direct orders over U.S. foreign policy from none other than Hungarian-American billionaire George Soros.Soros – who for years has been suspected of pulling the strings behind Clinton as well as dozens of foreign policy and open borders groups – appears to have sent a message through his “special advisor” Jonas Rolett.

The fact that Alex Soros, who was inspired in his own progressivism by his controversial father, has unfettered access to Kaine—Hillary Clinton’s running mate—is unsurprising. The Clinton apparatus has long come under scrutiny for their closeness with high dollar donor class figures, some of which has prompted federal law enforcement to fight for an official criminal investigation into the “Clinton Cash” narrative—one the Department of Justice (DOJ) under Attorney General Loretta Lynch has reportedly shut down. That being said, reports have surfaced that the U.S. Attorney for the Southern District of New York Preet Bharara is in fact investigating—along with the FBI—the Clinton Foundation for such donor class proclivities with the Clinton apparatus.

The entire looney left worships at this church: 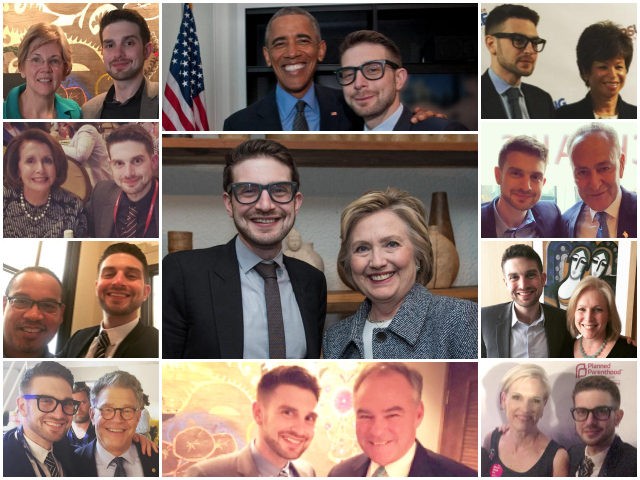 Others have foreseen Obama as working toward a new world order some time ago:

Mr. Obama has vowed to create a “green economy” based on “green-collar jobs” and “a green New Deal.” The Copenhagen treaty would enable him to accomplish his revolutionary ambitions. It would mark his Cultural Revolution – the permanent transformation of America.

This is why Brexit was such a blow to the global elites. It wrested control, not to mention to $127 billion, from them. (It’s always the money).

The EU never did this work. When asked “Where are you from?” almost no one would answer “Europe,” because after 50 years of assiduous labor by the eurocrats, Europe remains a continent, not an identity. As Matthew Yglesias points out, an EU-wide soccer team would be invincible — but who would root for it? These sorts of tribal affiliations cause problems, obviously, which is why elites were so eager to tamp them down. Unfortunately, they are also what glues polities together, and makes people willing to sacrifice for them. Trying to build the state without the nation has led to the mess that is the current EU. And to Thursday’s election results.

Elites missed this because they’re the exception — the one group that has a transnational identity. And in fact the arguments for the EU look a lot like the old arguments for national states: a project that will empower people like us against the scary people who aren’t.

Ms. Merkel’s acquaintance sighed and agreed. It’s one thing to be overwhelmed by an unexpected force, quite another to invite your invaders in! But, the acquaintance said, he believed the chancellor was operating in pursuit of ideals. As the daughter of a Lutheran minister, someone who grew up in East Germany, Ms. Merkel would have natural sympathy for those who feel marginalized and displaced. Moreover she is attempting to provide a kind of counter-statement, in the 21st century, to Germany’s great sin of the 20th. The historical stain of Nazism, the murder and abuse of the minority, will be followed by the moral triumph of open arms toward the dispossessed. That’s what’s driving it, said the acquaintance.

It was as good an explanation as I’d heard. But there was a fundamental problem with the decision that you can see rippling now throughout the West. Ms. Merkel had put the entire burden of a huge cultural change not on herself and those like her but on regular people who live closer to the edge, who do not have the resources to meet the burden, who have no particular protection or money or connections. Ms. Merkel, her cabinet and government, the media and cultural apparatus that lauded her decision were not in the least affected by it and likely never would be.

Nothing in their lives will get worse. The challenge of integrating different cultures, negotiating daily tensions, dealing with crime and extremism and fearfulness on the street—that was put on those with comparatively little, whom I’ve called the unprotected. They were left to struggle, not gradually and over the years but suddenly and in an air of ongoing crisis that shows no signs of ending—because nobody cares about them enough to stop it.

If Clinton is elected, America will be put into the high speed lane to the New World Order and will be dead in ten years. The new world order will insinuate itself into the US. The political version of Skynet will become sentient, resulting in a global Venezuela. Liberal elites will rule everything you do. That’s the plan. Source