What Jesus rejected, the popes accepted

And the devil, taking him up into an high mountain, shewed unto him all the kingdoms of the world in a moment of time.
And the devil said unto him, All this power will I give thee, and the glory of them: for that is delivered unto me; and to whomsoever I will I give it.
If thou therefore wilt worship me, all shall be thine.
And Jesus answered and said unto him, Get thee behind me, Satan: for it is written, Thou shalt worship the Lord thy God, and him only shalt thou serve. Luke 4:5-8

Notice in this account above that Jesus did not deny that Satan held control over all the political kingdoms  of the world – but still, Jesus rejected Satan’s offer.He not only refused – but told Satan to go away.

Mat 4:10  Then saith Jesus unto him, Get thee hence, Satan: for it is written, Thou shalt worship the Lord thy God, and him only shalt thou serve.

“Satan is actively involved in the political process.  In fact, he said to Christ, “I will give you all this  domain and its glory; for it has been handed over to me, and I give it to whomsoever I wish. Therefore if you  worship before me it shall all be yours” (Luke 4:6-7).
The book of Daniel teaches that there are wicked spirits who are assigned to various leaders. There is no question that some world leaders are but tools of the devil.”-Studies in Revelation
By: J. Hampton Keathley, III , Th.M. The Description of Religious Babylon  (17:1-6a)

THESE  SAME  “WORLDLY”  GOVERNMENTS WERE  OFFERED  TO  THE  POPES AND  THEY  ACCEPTED.

“Get away from me, Satan,” was Jesus’ reply.

This same friend returned after three hundred years,  and, leading the pontiff to the summit of the Roman hill, showed him all the kingdoms of the world and the glory  of them.  All these, said he, will I give thee,  if thou wilt fall down and worship me.”  No second  denial awaited the tempter: instantly the knee was bent,  and the pontiff raised his head crowned with the tiara.”  – History of the Papacy   by Rev. J.A. Wylie, LL.D.   Book I – Chapter III Rise and Progress of the Temporal Sovereignty.

“In 314 A.D., Pope Silvester was crowned by Emperor Constantine, as Bishop of Rome. The Pope wanted to  have the favor of the Roman Emperor. This alliance between Pope and Emperor created the Roman Catholic Church.” -Unmasking Catholicism Mary Ann Collins, a former Catholic nun Chapter 11; Imperial Popes
“the popes have been imitating the Byzantine emperor  in dress, attributes, and official ceremonial. They vested themselves with the imperial purple,  wore the red shoes traditionally associated with the  Byzantine emperor, adorned their heads with crowns,  and carried sceptres.  They assumed the right to humble  the mightiest potentates and dismiss them from their  thrones. As a consequence, the pope was often described as a monarch, and it was said of him that he was the true emperor.” -Myrio Biblos Library; Milton V. Anastos Chapter 23; The popes and temporal power: Summary and epilogue Aspects of the Mind of Byzantium; M.Anastos  (Political Theory, Theology, and Ecclesiastical  Relations with the See of Rome),
Ashgate Publications,  Variorum Collected Studies Series,  2001. ISBN: 0 86078 840 7.

“The Bishop of Rome, in the seat of the Caesars, was now the greatest man in the West, and would soon  become the political as well as the spiritual head.” -A.C. Flick,  The Rise of the Mediaval Church; p. 168.

“As heirs of the Roman imperial government,  enthroned in the first capital of the Empire,  the popes developed and extended such rights,  as they believed were granted them…they created  a doctrine that the pope of Rome was supreme over  both Church and State.” -Myrio Biblos Library; Milton V. Anastos Chapter 23; The popes and temporal power: Summary and epilogue Aspects of the Mind of Byzantium; M.Anastos  (Political Theory, Theology, and Ecclesiastical  Relations with the See of Rome), Ashgate Publications,  Variorum Collected Studies Series,  2001. ISBN: 0 86078 840 7.

“Whatever Roman elements the barbarians and Aryans  left…came under the protection of the Bishop of Rome, who was the chief person there after the Emperor’s  disappearance. The Roman Church in this way privily  pushed itself into the place of the Roman World-Empire,  of which it is the actual continuation; the empire has  not perished, but has only undergone a ransformation. The Catholic Church is a political creation, and as imposing as a World-Empire, because it is a continuation  of the Roman Empire. The Pope, who calls himself ‘King’  and ‘Pontifex Maximus’ [the title of the Roman Emperor  in the time of Christ], is Caesar’s successor.” –Adolf Harnack; What is Christianity? 1963, pp. 269-270.

“thus…commenced the temporal sovereignty of the popes.  Stepping to the throne of Caesar, the vicar of Christ took up the scepter to which the emperors and  kings of Europe were to bow in reverence through  so many ages.” –American Catholic Quarterly Review, April, 1911.

“…the Catholic Church…will survive the Empire… the Pope will be the master–more than this, he will be the master of all Europe.  He will dictate his orders  to kings who will obey them.”
–Andrea Lagarde,  The Latin Church in the Middle Ages, 1915, p. vi.
“The popes filled the place  of the vacant emperors at Rome,  inheriting their power, their prestige,  and their titles from PAGANISM.” -Stanley’s History, page 40

“At almost every stage of the development since the end  of the second century, we find the pope of Rome seeking  to exercise authority of universal scope and demanding  recognition as sole and absolute ruler.” -Myrio Biblos Library; Milton V. Anastos Chapter 23; The popes and temporal power: Summary and epilogue Aspects of the Mind of Byzantium; M.Anastos  (Political Theory, Theology, and Ecclesiastical  Relations with the See of Rome), Ashgate Publications,  Variorum Collected Studies Series,  2001. ISBN: 0 86078 840 7.

“…the Roman Pontiff, is the Vicar of…the earth  …the world and all that dwell therein, the fullest authority… in not only the spiritual but also the material sword,  and so he can transfer sovereignties,  break scepters and remove crowns.”  -[Catholic Dictionary, p 258]

“The Pope is one of the greatest fiscal powers in the world.”  -[The Vatican Empire, p.8]

BLASPHEMOUS  TITLESBESTOWED  UPON  THE  POPES

“The Pope is – as it were – God on earth,  sole sovereign of the faithful of Christ,  chief of kings, having plenitude of power,  to whom has been entrusted by the omnipotent God direction not only of the earthly but also of the heavenly kingdom. The Pope is of so great  authority and power that he can modify, explain,  or interpret even divine laws.” – [Luclus Ferraris, Vol 6, p.26]

II Thess. 2:4,  “He will oppose and will exalt himself  over everything that is called God  or is worshipped, so that he sets himself up  in God’s temple,  proclaiming himself to be God.”

“The Roman Pontiff has from on high  an authority which is supreme,  above all others and subject to none.  -[Pope Pius XI said in his Encyclical, Light of Truth, page 5]

“…the Roman Pontiff…requires complete submission and obedience of will to the church and to the Roman Pontiff as to God Himself.”  -[Great Encyclical Letters of Leo XIII, p. 193]

While Jesus humbly bent and washed the feet of his disciples the Popes require their subjects to kiss their feet and kiss the rings on their hands and to bow down before them. How different from the example that Jesus set.

In sharp contrast – the popes required their own feet to be kissed.
“Pope Eugenius II., who died in 827, was the first pope who made it the law to kiss the papal foot.  From that time it was necessary to kneel before  all the popes.  Pope Gregory VII ordered all princes to submit to this practice.” –The Religion of Rome by C. H. Spurgeon From the January 1873 Sword and Trowel
Kissing of the feet “Emperor Justin paid this mark of respect to Pope John I (523-26).  It is also found in  the “adoration” of the pope by the cardinals after his election.  It is also the normal salutation which papal  etiquette prescribes for those of the faithful who are presented to the pope in a private audience.  In his  “De altaris mysterio” (VI, 6)- Pope Innocent III explains that this ceremony indicates the very great reverence which is due to the Supreme Pontiff.” -The Catholic Encyclopedia, Volume VIII Kissing of the Feet Copyright © 1910 by Robert Appleton Company Nihil Obstat, October 1, 1910. Remy Lafort, S.T.D.,  Censor Imprimatur. +John Cardinal Farley,  Archbishop of New York 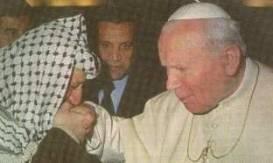 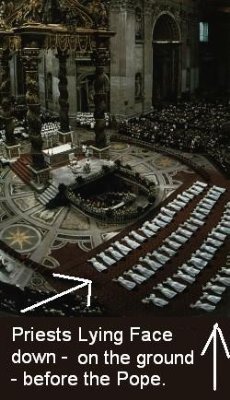 Above is an arial picture of many priests lying prostrate on the ground – face down before the pope.  Surely this is an act of worship.

Prince Albert bowing down and kissing the hand of the Pope

“On that day the Lord of All  will be against everyone who is proud  and feels important, and against all who are honored.  They will be put to shame.” (Isaiah 2:12)(NLV)-BibleGateway
“For whoever exalts himself will be humbled,  and whoever humbles himself will be exalted.”
(Matthew 23:12)(NIV)-BibleGateway
“The lofty looks of man shall be brought low,  and the haughtiness of men shall be bowed down,  and Jehovah alone shall be exalted in that day.” (Isaiah 2:12)(ASV)-BibleGateway
Rome Corrupted Christianity
Tags: Catholic Church

Man arrested with equivalent of 1,400 bags of heroin inside his body

So sad, Woman slices open relative with razor blades to save twins