What Was The Beast’s First Wound?

The first beast of Revelation 13 comes from the sea. In Revelation 13:3, the beast seems to receive a mortal wound, but it is then healed:

And I saw one of his heads as it were wounded to death; and his deadly wound was healed: and all the world wondered after the beast (Revelation 13:3).

This is how the BBE version renders the text:

And I saw one of his heads as if it had been given a death-wound; and his death-wound was made well: and all the earth was wondering at the beast.

One of the heads of the beast seemed to have had a fatal wound, but the fatal wound had been healed. The whole world was astonished and followed the beast.

The wound is a counterfeit wound, but nevertheless appears to be a mortal wound.

The Beast forms part of a trilogy of powers that constitute the last great confederacy against God, which the Bible calls Babylon. This end-time Babylon consists of three components: the Beast, the Dragon and theFalse Prophet. This false trinity wars against the true triune God. 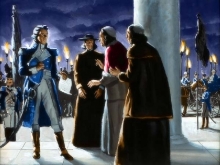 Papal supremacy of the Middle Ages ended in the year 1798, exactly 1260 years after Justinian’s decree established the Papacy as the supreme Christian power in 538 AD. In 1798, Napoleon’s army took the Pope captive and put him into exile. The murder of a Frenchman in Rome in 1798 gave the French the excuse they wanted to occupy the Eternal City.

It was really believed that the era of papal power had come to an end forever. However, the prophecy says, “And his deadly wound was healed and all the world wondered after the beast” (Revelation 13:3).

Healing of the Wound

In 1929, Prime Minister Benito Mussolini and Cardinal Pietro Gasparri signed an accord whereby the Pope had to pledge his own political party’s support to Mussolini in exchange for the return of his papal seat and power.

This monumental event was recorded in the San Francisco Chronicle with the heading “Mussolini and Gasparri sign Historic Roman Pact.” Even at that point, people understood the significance of what had happened. From 1929 onward,the political status of the Vatican was thus reinstated and the wound could heal fully.

The Beast, or Papacy, claims to be the representative of Christ. It demands the world’s obedience and also experienced a counterfeit death and resurrection. At the end of time, the power of the resurrected Papacy will be so great that no one would venture to make war against it. The deadly wound will be healed. Walter

This article is adapted from Truth Matters by Professor Walter J. Veith

Share
Facebook
Twitter
Pinterest
WhatsApp
Previous articleDoug Batchelor On “Mortal Wound Killed”
Next articleDaniel 7, The 4 Beasts Explained
Bible Study
Join us on Facebook or Follow us on Twitter by clicking on the icons to get more updates. Have a question? Join our Forums and lets discuss. Consider sharing this article. It's that simple to spread the gospel. God bless you.