Bible Study Present day signs of the end
Home End times headlines While Trying To Propose He Dropped Ring Into The Ocean, What Happened Next Will Move You

A North Carolina man’s heart nearly drowned in sorrow after he slipped his engagement ring into the ocean while attempting to propose to his girlfriend.

Matthew Picca, 25, and his girlfriend Kayla Harrity, 24, were on vacation in Southport on Saturday when Matthew got down on one knee to pop the question and the engagement ring slipped through the cracks of the deck at the bar Old American Fish and into the water.

‘I turned around and he was getting down on one knee,’ Kayla told WECT.

Proposal: Matthew Picca, 25, and his girlfriend, 24, were on vacation in Southport on Saturday when Matthew got down on one knee to pop the question and the engagement ring slipped through the cracks of the deck and into the ocean

‘As he opened the ring box, the ring fell out of the box and fell through the cracks on the deck and into the water. I didn’t even get to see it before it dropped.’

Luckily the couple managed to get the ring back but not without a lot of help from the spectators around them.

‘I covered my face and began to cry because I knew my boyfriend was devastated,’ she said.

‘Matthew did not even get to say anything to me before the ring fell into the ocean.’

‘At the bar, there were three men who were enjoying a beer who saw the whole thing,’ she said.

‘They must have felt bad for us and did not want to see our engagement end like this. They jumped in the water and helped look for the ring.’

Kayla’s sister also helped to locate the ring but ruined Matthew’s cell phone in the process.

Thinking it had a special protective case, her sister used Matthew’s cell phone flashlight underwater which didn’t help locate the ring nor was it great for the phone which is now non-functional. 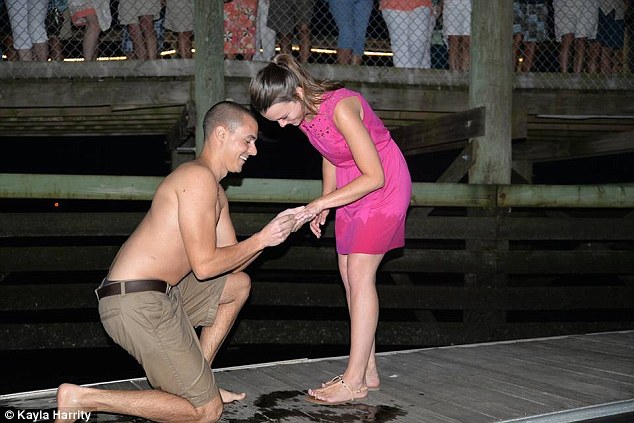 Happy ending: Since the first proposal didn’t work out as planned they decided to do it all over again – this time without dropping anything after a Good Samaritan found the ring

Wect reports that Kayla ran through the nighborhood frantically searching or goggles so that she could find the gem beneath the waters.

‘After ten flashlights, and five pairs of goggles and over 1.5 hours of searching in the water…the ring was found!’ Kayla said.

A Good Samaritan named Kyle Blusher found the ring to the excitement of Kayla and Matthew, those who loved them, and the scores of others who came to help out.

Since the first proposal didn’t work out as planned they decided to do it all over again – this time without dropping anything.

‘Everyone at the bar was cheering. All of a sudden, everyone was chanting “Propose again! Do it again!”,’ Kayla recalled.

‘It was the best feeling in the world. My fiancé, soaking wet, smelling like salty, fishing water, proceeded to get down on one knee and put the beautiful ring on my finger!’

‘The energy of everyone at the bar was incredible. It was a total shock that he even found the ring,’ Kayla added.

‘We walked upstairs and bought the men who helped us a round of shots. They were amazing and we are so grateful to have their help that night.’

The couple celebrated their proposal and the kindness of others at the bar for another hour before taking a romantic ride around Southport where they now plan to have their wedding and where they are the talk of the town.

‘When we got back, people were still coming up asking to see the ring,’ Kayla said.

‘They said everyone in Southport was talking about it. It was definitely a night to remember!’